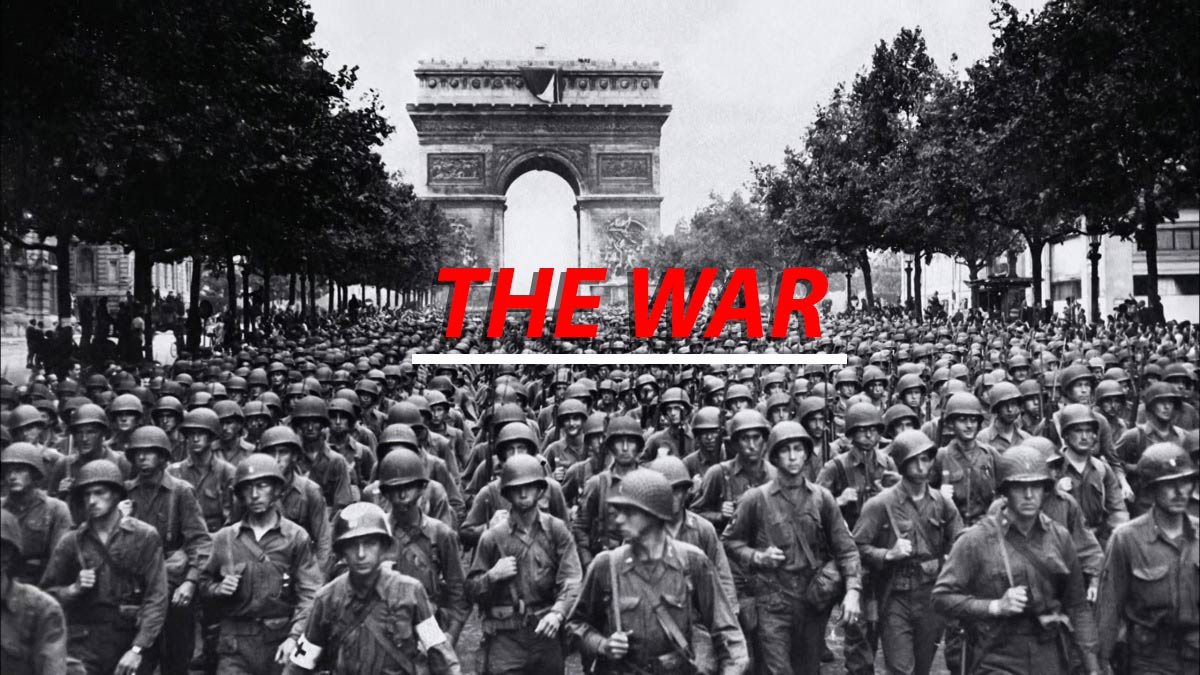 The War episode 4: On June 6, 1944, D-Day, 1.5 million Allied troops take part in the greatest invasion in history, but then bog down in Norman hedgerows for weeks. Saipan proves the costliest Pacific battle to date, while back home dreaded telegrams for the War Department begin arriving at an inconceivable rate.

The Normandy landings were the landing operations and associated airborne operations on Tuesday, 6 June 1944 of the Allied invasion of Normandy in Operation Overlord during World War II. Codenamed Operation Neptune and often referred to as D-Day, it was the largest seaborne invasion in history. The operation began the liberation of France (and later western Europe) and laid the foundations of the Allied victory on the Western Front.

Planning for the operation began in 1943. In the months leading up to the invasion, the Allies conducted a substantial military deception, codenamed Operation Bodyguard, to mislead the Germans as to the date and location of the main Allied landings. The weather on D-Day was far from ideal, and the operation had to be delayed 24 hours; a further postponement would have meant a delay of at least two weeks, as the invasion planners had requirements for the phase of the moon, the tides, and the time of day that meant only a few days each month were deemed suitable. Adolf Hitler placed Field Marshal Erwin Rommel in command of German forces and of developing fortifications along the Atlantic Wall in anticipation of an Allied invasion.

The amphibious landings were preceded by extensive aerial and naval bombardment and an airborne assault—the landing of 24,000 American, British, and Canadian airborne troops shortly after midnight. Allied infantry and armoured divisions began landing on the coast of France at 06:30. The target 50-mile (80 km) stretch of the Normandy coast was divided into five sectors: Utah, Omaha, Gold, Juno, and Sword. Strong winds blew the landing craft east of their intended positions, particularly at Utah and Omaha.

The men landed under heavy fire from gun emplacements overlooking the beaches, and the shore was mined and covered with obstacles such as wooden stakes, metal tripods, and barbed wire, making the work of the beach-clearing teams difficult and dangerous. Casualties were heaviest at Omaha, with its high cliffs. At Gold, Juno, and Sword, several fortified towns were cleared in house-to-house fighting, and two major gun emplacements at Gold were disabled using specialised tanks.

Battle of Saipan – The War episode 4

The Battle of Saipan was a battle of the Pacific campaign of World War II, fought on the island of Saipan in the Mariana Islands from 15 June to 9 July 1944 as part of Operation Forager. It has been referred to as the “Pacific D-Day” with the invasion fleet departing Pearl Harbor on 5 June 1944, the day before Operation Overlord in Europe was launched, and launching nine days after.

The U.S. 2nd Marine Division, 4th Marine Division, and the Army’s 27th Infantry Division, commanded by Lieutenant General Holland Smith, defeated the 43rd Infantry Division of the Imperial Japanese Army, commanded by Lieutenant General Yoshitsugu Saito. The loss of Saipan, with the deaths of at least 29,000 troops and heavy civilian casualties, precipitated the resignation of Prime Minister of Japan Hideki Tōjō and left the Japanese archipelago within the range of United States Army Air Forces B-29 bombers.

In the campaigns of 1943 and the first half of 1944, the Allies had captured the Solomon Islands, the Gilbert Islands, the Marshall Islands and the Papuan Peninsula of New Guinea. This left the Japanese holding the Philippines, the Caroline Islands, the Palau Islands, and the Mariana Islands.

It had always been the intention of the American planners to bypass the Carolines and Palauan islands and to seize the Marianas and Taiwan. From these latter bases, communications between the Japanese archipelago and Japanese forces to the south and west could be cut. From the Marianas, Japan would be well within the range of an air offensive relying on the new Boeing B-29 Superfortress long-range bomber with its operational radius of 3,250 mi (5,230 km).

While not part of the original American plan, Douglas MacArthur, commander of the Southwest Pacific Area command, obtained authorization to advance through New Guinea and Morotai toward the Philippines. This allowed MacArthur to keep his personal pledge to liberate the Philippines, made in his “I shall return” speech, and also allowed the active use of the large forces built up in the southwest Pacific theatre. The Japanese, expecting an attack somewhere on their perimeter, thought an attack on the Caroline Islands most likely. To reinforce and supply their garrisons, they needed naval and air superiority, so Operation A-Go, a major carrier attack, was prepared for June 1944.