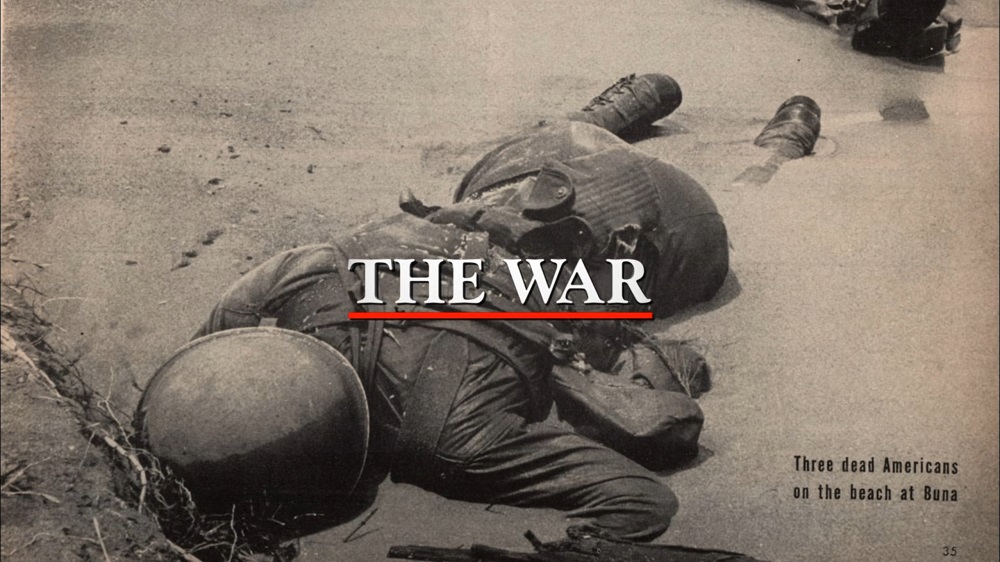 The War episode 3: Americans are shocked by terrible losses on the Pacific atoll of Tarawa, while in Italy Allied forces are stalled for months at Monte Cassino, and a risky landing at Anzio fails utterly. At home, as overcrowded “war towns” boom, economic transformation leads to confrontation and ugly racial violence.

The Battle of Tarawa was a battle in the Pacific Theater of World War II that was fought on 20–23 November 1943. It took place at the Tarawa Atoll in the Gilbert Islands, and was part of Operation Galvanic, the U.S. invasion of the Gilberts. Nearly 6,400 Japanese, Koreans, and Americans died in the fighting, mostly on and around the small island of Betio, in the extreme southwest of Tarawa Atoll.

The Battle of Tarawa was the first American offensive in the critical central Pacific region. It was also the first time in the Pacific War that the United States had faced serious Japanese opposition to an amphibious landing. Previous landings met little or no initial resistance, but on Tarawa the 4,500 Japanese defenders were well-supplied and well-prepared, and they fought almost to the last man, exacting a heavy toll on the United States Marine Corps. The losses on Tarawa were incurred within 76 hours.

The Battle of Monte Cassino (also known as the Battle for Rome and the Battle for Cassino) was a costly series of four assaults by the Allies against the Winter Line in Italy held by Axis forces during the Italian Campaign of World War II. The intention was a breakthrough to Rome.

At the beginning of 1944, the western half of the Winter Line was being anchored by Germans holding the Rapido-Gari, Liri and Garigliano valleys and some of the surrounding peaks and ridges. Together, these features formed the Gustav Line. Monte Cassino, a historic hilltop abbey founded in AD 529 by Benedict of Nursia, dominated the nearby town of Cassino and the entrances to the Liri and Rapido valleys. Lying in a protected historic zone, it had been left unoccupied by the Germans, although they manned some positions set into the steep slopes below the abbey’s walls.

Repeated pinpoint artillery attacks on Allied assault troops caused their leaders to conclude the abbey was being used by the Germans as an observation post, at the very least. Fears escalated along with casualties and in spite of a lack of clear evidence, it was marked for destruction. On 15 February American bombers dropped 1,400 tons of high explosives, creating widespread damage. The raid failed to achieve its objective, as German paratroopers then occupied the rubble and established excellent defensive positions amid the ruins.

The War episode 3: Americans are shocked by losses on the Pacific, while in Italy Allied forces are stalled for months at Monte Cassino

Ceramics A Fragile History – The Story of Clay ep.1