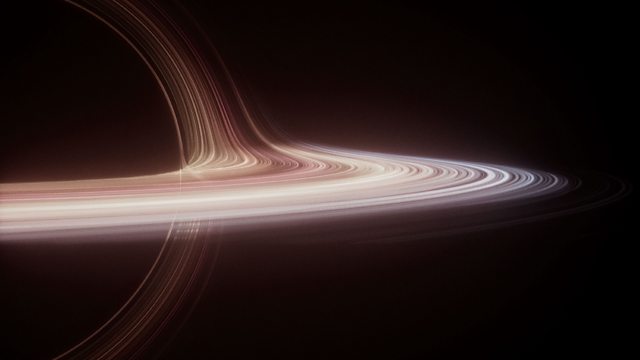 Universe – Black Holes: Heart of Darkness episode 4: Prof Brian Cox journeys into a supermassive black hole – a monster that can destroy worlds, stop time, and is forcing us to reassess our understanding of reality.

Professor Brian Cox continues his epic exploration of the universe with a journey into darkness. The centre of our galaxy is home to an invisible monster of unimaginable power – a supermassive black hole named Sagittarius A*. Weighing 4 million times the mass of the Sun, it’s an object with such an immense gravitational field that nothing can escape – not even light.

For decades, black holes existed purely in the minds of theoretical physicists – the idea was so absurd, scientists thought they couldn’t possibly exist in nature. But recent astronomical breakthroughs have confirmed, not only that black holes like Sagittarius A* exist, but that these bizarre invisible objects may be the ultimate galactic protagonists.

Stunning CGI takes us back to witness the fiery origins of our galaxy’s black hole 13.6 billion years ago, when the early universe was home to colossal blue stars hundreds of times more massive than our sun. These stars lived fast and died young, and when they ran out of fuel they collapsed under their own enormous mass, crushing down into an object so small and so dense it punched a hole in the fabric of the universe. Our galaxy’s black hole was born.

The story of Sagittarius A* is a tale of both destruction and creation. Over billions of years it feasted on nearby gas and stars and through cataclysmic mergers with other black holes it sent ripples through the fabric of the Universe. But Brian reveals that we have recently come to understand how our black hole is also an agent of creation. A breakthrough discovery by NASA’s Fermi gamma-ray telescope has shown that our black hole once had the power to sculpt the entire galaxy, creating vast bubbles of gas above and below our galaxy that persist to this day. We may even have Sagittarius A* to thank for our own existence.

In a mind-bending conclusion Brian reveals how our modern understanding of black holes is challenging our concepts of reality to breaking point. He takes us on a trip inside Sagittarius A* where we discover that the interior of a black hole is not a tomb, it’s a gateway to the end of the Universe. And weirder still – in trying to understand the fate of objects that fall into Sagittarius A*, scientists have come to a stunning conclusion: space and time, concepts so foundational to how we experience the world around us, are not as fundamental as we once thought.

Sagittarius A* is a bright and very compact astronomical radio source at the Galactic Center of the Milky Way. It is located near the border of the constellations Sagittarius and Scorpius, about 5.6° south of the ecliptic, visually close to the Butterfly Cluster (M6) and Shaula. Sagittarius A* is the location of a supermassive black hole, similar to massive objects at the centers of most, if not all, spiral and elliptical galaxies.

Observations of several stars orbiting Sagittarius A*, particularly star S2, have been used to determine the mass and upper limits on the radius of the object. Based on mass and increasingly precise radius limits, astronomers have concluded that Sagittarius A* is the Milky Way’s central supermassive black hole. The current value of its mass is slightly in excess of 4 million solar masses.

Reinhard Genzel and Andrea Ghez were awarded the 2020 Nobel Prize in Physics for their discovery that Sgr A* is a supermassive compact object, for which a black hole is the only currently known explanation.

Astronomers have been unable to observe Sgr A* in the optical spectrum because of the effect of 25 magnitudes of extinction by dust and gas between the source and Earth. Several teams of researchers have attempted to image Sgr A* in the radio spectrum using very-long-baseline interferometry (VLBI). The current highest-resolution (approximately 30 μas) measurement, made at a wavelength of 1.3 mm, indicated an overall angular size for the source of 50 μas. At a distance of 26,000 light-years, this yields a diameter of 60 million kilometres. For comparison, Earth is 150 million kilometres from the Sun, and Mercury is 46 million kilometres from the Sun at perihelion. The proper motion of Sgr A* is approximately −2.70 mas per year for the right ascension and −5.6 mas per year for the declination.

Colour – The Spectrum of Science episode 3