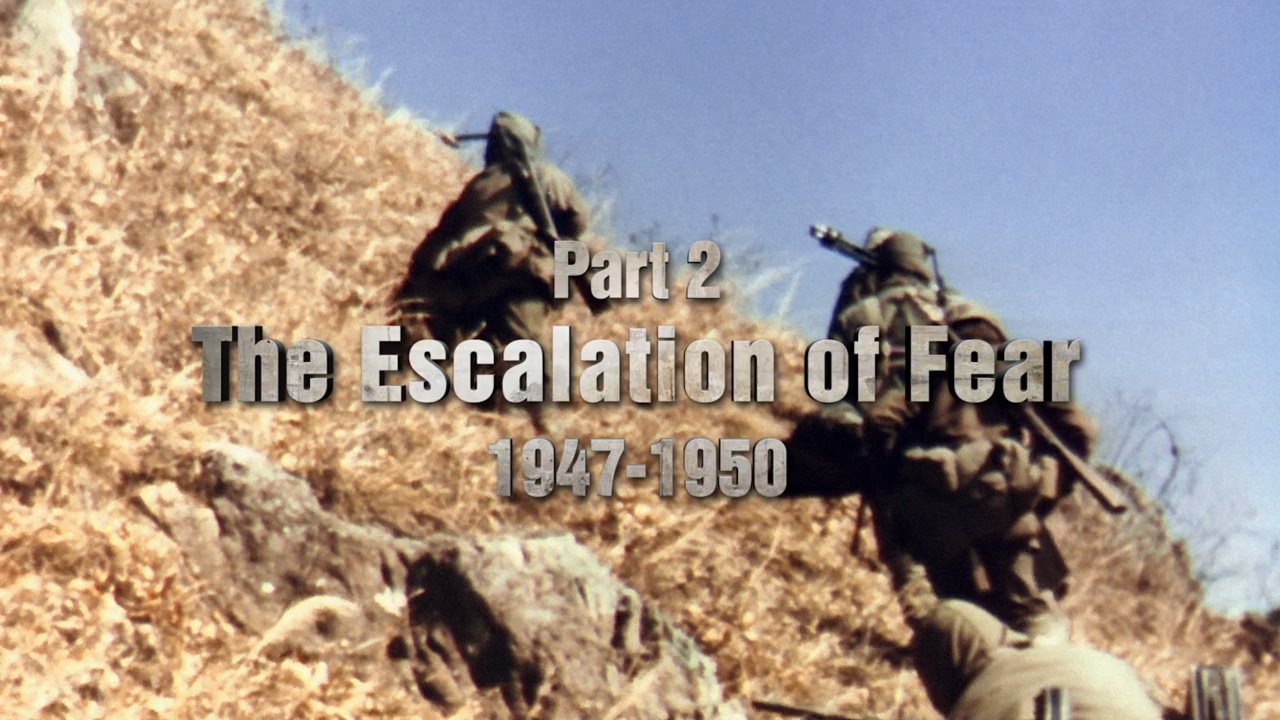 War of Worlds 1947-1950 – The Escalation of Fear: 1947. Fearing that a damaged Europe might fall prey to Communism, President Truman launches the Marshall Plan, a major loan package offered to European nations to assist in their reconstruction. It is also a way to help the French in Indochina, where Ho Chi Minh has established a proper government, working from its “bamboo ministries”. His army and his influence grow with each passing day. At the Kremlin, Stalin celebrates his 70th birthday.

The grandiose celebrations organized for him around the world are a testimony to his power. In Berlin, he has imposed a blockade, which is overcome only thanks to the bravery of American pilots and their airlift. But Stalin prefers to focus on the success of his brand new atomic bomb. And the red wave continues to progress… In China, after a long civil war, Mao Zedong installs a totalitarian regime which will kill more than 50 million people in thirty years. In Korea, communist troops from the north have crossed the 38th parallel and are heading south, facing a South Korean army lacking men and supplies. Truman decides to intervene: commanded by General McArthur, the UN troops are sent to the front. A real debacle awaits them. Entrenched in the far south of Korea, in Pusan, Americans are surrounded by the enemy, will they be able to hold out?

The Marshall Plan (officially the European Recovery Program, ERP) was an American initiative enacted in 1948 to provide foreign aid to Western Europe. The United States transferred over $13 billion (equivalent of about $114 billion in 2020) in economic recovery programs to Western European economies after the end of World War II. Replacing an earlier proposal for a Morgenthau Plan, it operated for four years beginning on April 3, 1948. The goals of the United States were to rebuild war-torn regions, remove trade barriers, modernize industry, improve European prosperity, and prevent the spread of communism. The Marshall Plan required a reduction of interstate barriers and the dissolution of many regulations while also encouraging an increase in productivity as well as the adoption of modern business procedures.

The Marshall Plan aid was divided among the participant states roughly on a per capita basis. A larger amount was given to the major industrial powers, as the prevailing opinion was that their resuscitation was essential for the general European revival. Somewhat more aid per capita was also directed toward the Allied nations, with less for those that had been part of the Axis or remained neutral. The largest recipient of Marshall Plan money was the United Kingdom (receiving about 50% of the total), but the enormous cost that Britain incurred through the “Lend-Lease” scheme was not fully re-paid to the US until 2006. The next highest contributions went to France (8%) and West Germany (12%). Some eighteen European countries received Plan benefits. Although offered participation, the Soviet Union refused Plan benefits, and also blocked benefits to Eastern Bloc countries, such as Romania and Poland. The United States provided similar aid programs in Asia, but they were not part of the Marshall Plan.

Its role in the rapid recovery has been debated. The Marshall Plan’s accounting reflects that aid accounted for about 3% of the combined national income of the recipient countries between 1948 and 1951, which means an increase in GDP growth of less than half a percent.

War of Worlds 1947-1950: Fearing that a damaged Europe might fall prey to Communism, President Truman launches the Marshall Plan.