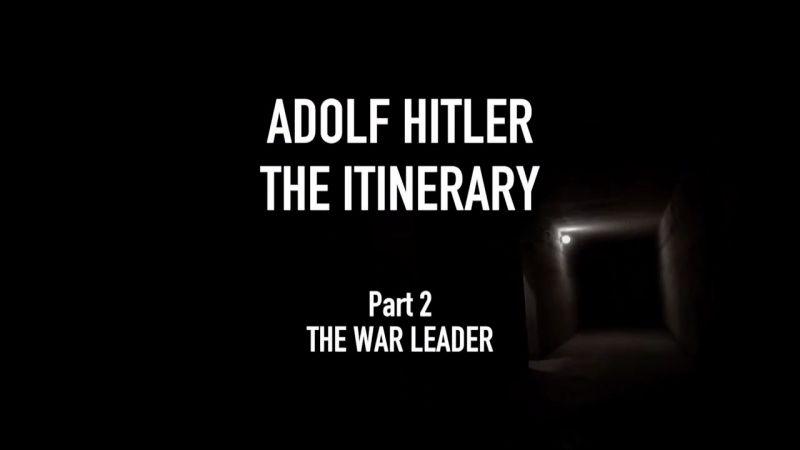 Adolf Hitler the Itinerary episode 2 – The War Leader: Harald Sandner continues his study of Adolf Hitler as he seizes control of Germany and plunges the European continent into the bloodiest conflict the world has ever seen. Harald meticulously notes every success and failure as the world’s powers come together to put an end to this chapter in history.

For 25 years, Harald Sandner, a history enthusiast, has traced the Fuhrer’s itinerary from his childhood to the end of his life.

Adolf Hitler was a German politician and leader of the Nazi Party. He rose to power as the chancellor of Germany in 1933 and then as Führer in 1934. During his dictatorship from 1933 to 1945, he initiated World War II in Europe by invading Poland on 1 September 1939. He was closely involved in military operations throughout the war and was central to the perpetration of the Holocaust.

Hitler was born in Austria—then part of Austria-Hungary—and was raised near Linz. He moved to Germany in 1913 and was decorated during his service in the German Army in World War I. Hitler in 1919, he joined the German Workers’ Party (DAP), the precursor of the NSDAP, and was appointed leader of the NSDAP in 1921. In 1923, he attempted to seize power in a failed coup in Munich and was imprisoned. In jail, he dictated the first volume of his autobiography and political manifesto Mein Kampf (“My Struggle”). After his release in 1924, Hitler gained popular support by attacking the Treaty of Versailles and promoting Pan-Germanism, anti-semitism and anti-communism with charismatic oratory and Nazi propaganda. He frequently denounced international capitalism and communism as part of a Jewish conspiracy.

Under Hitler’s leadership and racially motivated ideology, the Nazi regime was responsible for the genocide of about 6 million Jews and millions of other victims whom he and his followers deemed Untermenschen (subhumans) or socially undesirable. Hitler and the Nazi regime were also responsible for the killing of an estimated 19.3 million civilians and prisoners of war. In addition, 28.7 million soldiers and civilians died as a result of military action in the European theatre. The number of civilians killed during World War II was unprecedented in warfare, and the casualties constitute the deadliest conflict in history.

Adolf Hitler the Itinerary episode 2: continues the study of Adolf Hitler as he seizes control of Germany and plunges the European continent into conflict.