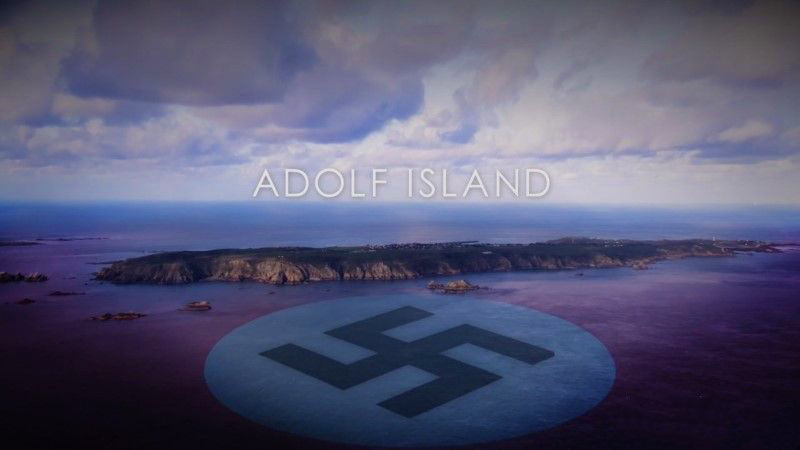 Adolf Island: Caroline Sturdy Colls, a world leader in the forensic investigation of Nazi crime scenes, is chasing clues to an unsolved case: a concentration camp that existed on the British island of Alderney. Witnesses and survivors claimed that thousands died there, but only 389 bodies have ever been found.

Under heavy restrictions imposed by the local government, which may not want its buried secrets revealed, Colls must uncover the truth using revolutionary techniques and technologies.

In June 1940, the entire population of Alderney, about 1,500 residents, were evacuated. Most went on the official evacuation boats sent from mainland Britain. Some, however, decided to make their own way, mostly via Guernsey, but due to the impending occupation many found themselves unable to leave and were forced to stay on Guernsey for the duration of the war.

A few Alderney people elected not to leave Alderney with the general evacuation. However, boats from Guernsey came and collected them before the German Army arrived, on the basis that it was best for their personal safety. During the Second World War, the Channel Islands were the only part of the British Isles that was occupied by Germany, although other parts of the Empire were occupied by the Axis powers.

The Germans arrived to a deserted island, and began to follow their orders to fortify Alderney as part of Hitler’s Atlantic Wall. In January 1942 they built four camps in Alderney: two work camps, Lager Helgoland and Lager Borkum, and two concentration camps, Lager Sylt and Lager Norderney. The jail behind the main police station was used by the Nazis as a prison. They were built by the Nazi Organisation Todt (OT) to house the labour used to build fortifications including bunkers, gun emplacements, tunnels, air-raid shelters and other concrete and field fortifications.

Adolf Island: Caroline Sturdy Colls, a world leader in the forensic investigation of Nazi crime scenes, is chasing clues to an unsolved case.

Jerusalem: The Making of a Holy City episode 1