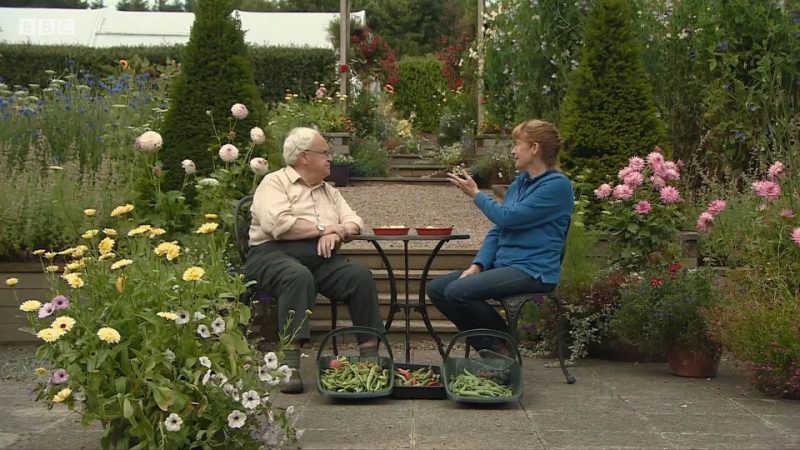 In The Beechgrove Garden episode 20 2017: they say that the proof of the pudding is in the eating. Well, this week in the Beechgrove Garden, Jim and Carole munch their way through the veg plot as they taste-test turnips, a new broad bean and someblight-resistant potatoes.

Chris takes a look at the new rose garden and has a new take on some age-old remedies for common rose problems. George visits the grand Drummond Castle Gardens near Crieff in Perthshire. The formal garden and parterre are among the oldest in Scotland and reputedly some of the finest in Europe.

Jim and Carole were at the raised beds beside the vegetable polytunnels looking at the salad turnips. Jim sowed a range of new varieties to observe. Half way through the season the turnips were decimated by pigeons so a second sowing was done in the middle of June. Within 8 weeks they were now ready to harvest.
As they are quick maturing crop (like lettuce and radish) you could get up to a succession of 3 sowings during one summer.

Chris was reviewing the new rose garden, highlighting some concerns and successes and some new (and old) hints and tips on roses generally. The Rose Garden was planted up in May (Episode 6 2017) and it has developed and established really well. Some of
the roses have really come into their own.

Jim and Carole were at the trees for a small garden area where they were going to sow some green manures. The box hedge alternatives planted under the trees were starting to grow away nicely. The Berberis was starting to recover from rabbit attack.
Also sowing green manure is a cheap way of keeping the beds tidy and weed-free and also adding organic matter to the soil. They will be sown now whilst the soil is still warm. In spring the tops will be cut off and then dug into soil. Green manures help to replace and hold nutrients in the soil.

Chris was in the Heather Garden showing how to prune 3 Sorbus (rowans) for different effects and reasons. Sorbus ‘Joseph Rock’. Chris removed some side shoots from the main stem to create a lollipop effect to the tree. If the young vigorous side shoots are allowed to stay the broadening canopy will develop low down and compromise the other plantings. The canopy can be lifted from about waist level to create a good clear stem with a lollipop shaped canopy. 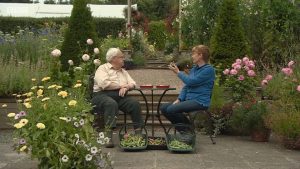 In Beechgrove Garden episode 20 2017: Jim and Carole munch their way through the veg plot as they taste-test turnips, a new broad bean.