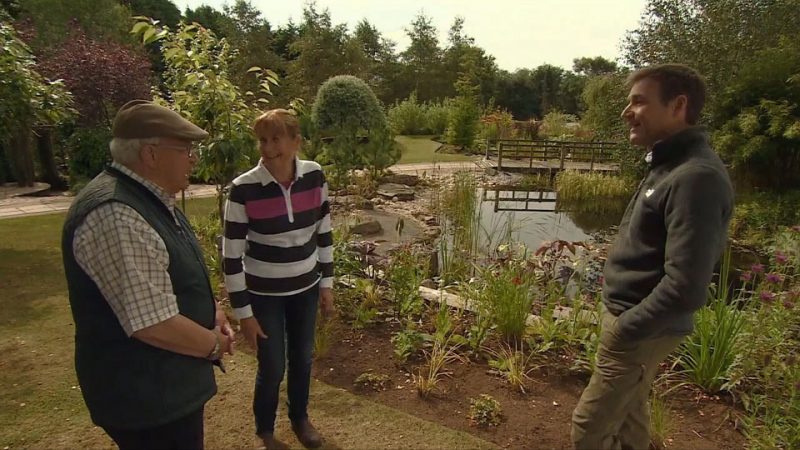 In Beechgrove Garden episode 21 2017: Jim takes a final tally and taste-test of tomatoes in the greenhouse. Carole is in Ardersier for Vegetable Garden on a Budget. Carole catches up with Mari Reid for harvest and a picnic on the beach, and to hear how much three families have saved and gained by growing their own.

Tourists and townspeople often stop to admire the front garden of James Findlay in Carluke. Jim joins the crowd and James explains how he took over his neighbour’s garden to increase the kerb appeal in Carluke.

The pond has been really successful year. The gardeners have managed keep the algal bloom at bay so that all the plants have put on a huge amount of growth.
The water lilies were starting to bloom. Last year Chris propagated some of these water lilies and planted them up, placing them on a shelf near the pond’s edge. It was now time to move them deeper into the pond as their stems were getting too long for their position.
He gently floated them in their baskets across the pond surface so that the stems did not break. He placed them at a depth where the pads were just floating on the surface of the water. Next year they can be moved even deeper.

2. Vegetable Gardening on a Budget

Carole paid a final visit to Ardersier for the last in her series of Vegetable Gardening on a budget. Mari Reid is taking part in a kind of land share project with a couple of friends and neighbours, Mary and Rosemary. Carole caught up with her to find out how the harvest has gone this year and how much money they have saved.

Jim and Chris were at the Orchard Lawn looking at the conifer hedging trials. With a bit of luck this will be the last chapter in the saga of the dying Chaemaecyparis
lawsoniana ‘Stardust’ hedge. Chris had dug a deep hole to see if there were any drainage issues below the dead plants. Chamaecypari’s lawsoniana
‘Grayswood Feather’ was planted on this spot back in 2009. Within 4 years the hedge had died. Meanwhile the other hedging materials had been absolutely fine.

In Beechgrove Garden episode 21 2017: Jim takes a final tally and taste-test of tomatoes in the greenhouse. Carole is in Vegetable Garden on a Budget.