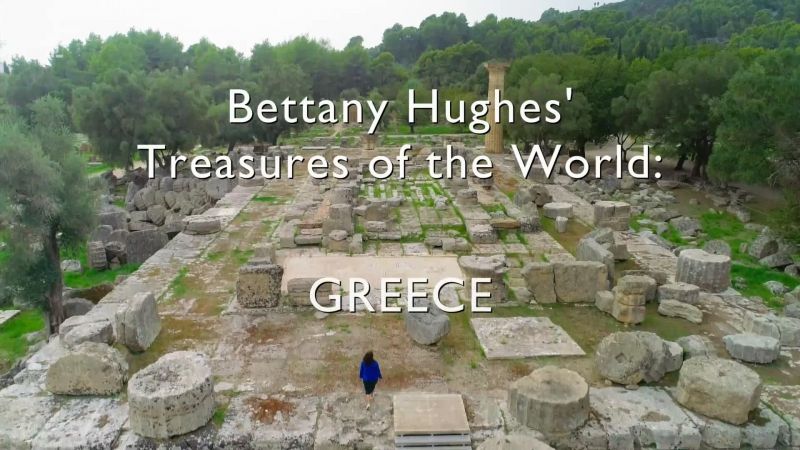 Bettany Hughes Treasures of the World episode 1: The first episode focuses on Greece, including a visit to the archaeological dig at the site of Alexander the Great birthplace in Aegae. Her journey also takes her to Athens, Nafplio, Sparta and Olympia, and to a dig at Epidaurus, where an underground snake pit used for healing has been discovered and an ancient theatre turns out to still be acoustically perfect.

Bettany Mary Hughes is an English historian, author and broadcaster, specialising in classical history. Her published books cover classical antiquity and myth, and the history of Istanbul. She is active in efforts to encourage the teaching of the classics in UK state schools. Hughes was appointed OBE in 2019.

Alexander III of Macedon, commonly known as Alexander the Great (Greek: Αλέξανδρος ο Μέγας), was a king of the Ancient Greek of Macedon. A member of the Argead dynasty, he was born in Pella—a city in Ancient Greece—in 356 BC. He succeeded his father King Philip II to the throne at the age of 20, and spent most of his ruling years conducting a lengthy military campaign throughout Western Asia and Northeastern Africa. By the age of thirty, he had created one of the largest empires in history, stretching from Greece to northwestern India. He was undefeated in battle and is widely considered to be one of history’s greatest and most successful military commanders.

During his youth, Alexander was tutored by Aristotle until the age of 16. His father Philip was assassinated in 336 BC at the wedding of Cleopatra of Macedon, Alexander’s sister, and Alexander assumed the throne of the Kingdom of Macedon. In 335 BC he campaigned in the Balkans, reasserting control over Thrace and Illyria before sacking the Greek city of Thebes. Alexander was then awarded the generalship of Greece. He used his authority to launch his father’s pan-Hellenic project, assuming leadership over all the Greeks in their conquest of Persia.

Epidaurus (Greek: Ἐπίδαυρος) was a small city (polis) in ancient Greece, on the Argolid Peninsula at the Saronic Gulf. Two modern towns bear the name Epidavros: Palaia Epidavros and Nea Epidavros. Since 2010 they belong to the new municipality of Epidaurus, part of the regional unit of Argolis. The seat of the municipality is the town Lygourio.

Epidaurus is best known for its sanctuary, the Asclepeion, situated about five miles (8 km) from the town, with its theatre, which is once again in use today. The cult of Asclepius at Epidaurus is attested in the 6th century BC, when the older hill-top sanctuary of Apollo Maleatas was no longer spacious enough. It was the most celebrated healing centre of the Classical world, the place where ill people went in the hope of being cured. To find out the right cure for their ailments, they spent a night in the enkoimeteria, a big sleeping hall. In their dreams, the god himself would advise them what they had to do to regain their health. Within the sanctuary there was a guest house with 160 guest rooms. There are also mineral springs in the vicinity, which may have been used in healing.

Bettany Hughes Treasures of the World episode 1: The first episode focuses on Greece, including a visit to the archaeological dig in Aegae