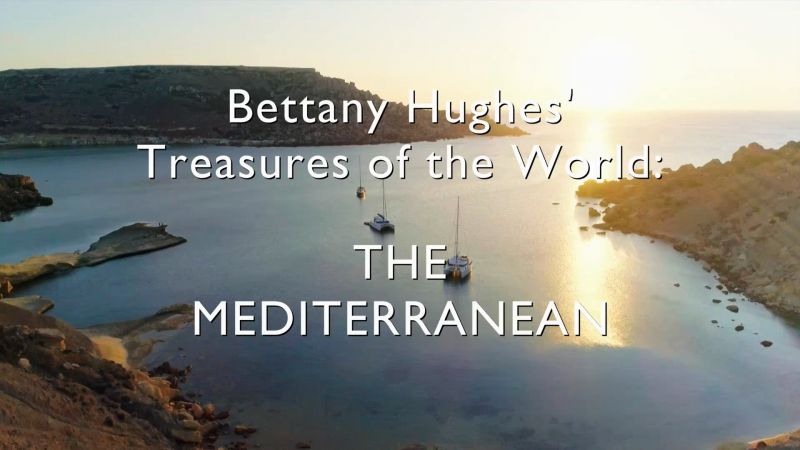 Bettany Hughes Treasures of the World episode 4: Bettany embarks on a Mediterranean voyage, beginning at its mouth with a recently discovered mask of Medusa, identified from fragments in Gorham’s Cave on Gibraltar. Charting a course east, Bettany journeys to the strategic Island of Malta, where a Punic tomb has just been discovered. She reveals contents that prove these Phoenicians originated from North Africa. In the countryside, Bettany discovers how farmers grow three citrus crops a year with a special tour of an ancient Arabic underground irrigation system called `The Invention of Summer”.

Phoenicia was an ancient thalassocratic (a state with primarily maritime realms) civilization originating in the Levant region of the eastern Mediterranean, primarily located in modern Lebanon. It was concentrated along the coast of Lebanon and included some coastal areas of modern Syria and Israel, reaching as far north as Arwad, and as far south as Acre and possibly Gaza. At its height between 1100 and 200 BC, the Phoenician civilization spanned the Mediterranean from Cyprus to the Iberian Peninsula.

The Phoenicians were a Semitic-speaking people of somewhat unknown origin who emerged in the Levant around 3000 BC. The term Phoenicia is an ancient Greek exonym that most likely described one of their most famous exports, a dye also known as Tyrian purple; it did not correspond precisely to a cohesive culture or society as it would have been understood natively. It is debated whether Phoenicians were actually distinct from the broader group of Semitic-speaking peoples known as Canaanites. Historian Robert Drews believes the term “Canaanites” corresponds to the ethnic group referred to as “Phoenicians” by the ancient Greeks; However, according to archaeologist Jonathan N. Tubb, “Ammonites, Moabites, Israelites, and Phoenicians undoubtedly achieved their own cultural identities, and yet ethnically they were all Canaanites”, “the same people who settled in farming villages in the region in the 8th millennium BC.”

The Phoenicians came to prominence in the mid-12th century BC, following the decline of most influential cultures in the Late Bronze Age collapse. They were renowned among contemporaries as skilled traders and mariners, becoming the dominant commercial power for much of classical antiquity. The Phoenicians developed an expansive maritime trade network that lasted over a millennium, helping facilitate the exchange of cultures, ideas, and knowledge between major cradles of civilization such as Greece, Egypt, and Mesopotamia. After its zenith in the ninth century BC, the Phoenician civilization in the eastern Mediterranean slowly declined in the face of foreign influence and conquest; its presence endured in the central and western Mediterranean until the mid-second century BC.

Bettany Hughes Treasures of the World episode 4: Bettany embarks on a Mediterranean voyage, beginning with a discovered mask of Medusa