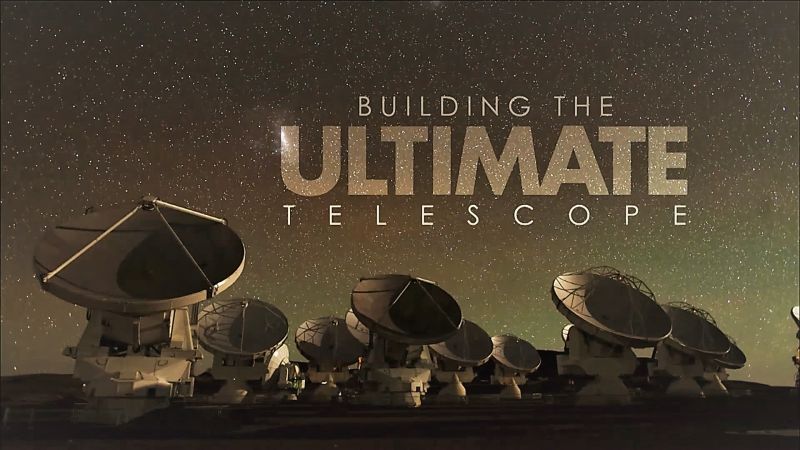 Building: The Ultimate Telescope – On a high plateau in a remote desert in northern Chile lies the largest observatory on Earth, ALMA, or Atacama Large Millimeter/Submillimeter Array. The name refers to a network of 66 massive radio telescopes, working in unison to observe the birth and death of stars and planets, and answer centuries-old questions about the origins of our universe.

Witness the history of ALMA, the remarkable product of a 20-year global effort, and see how it is already changing our basic understanding of the cosmos, and astronomy itself.

The Atacama Large Millimeter/submillimeter Array (ALMA) is an astronomical interferometer of 66 radio telescopes in the Atacama Desert of northern Chile, which observe electromagnetic radiation at millimeter and submillimeter wavelengths. The array has been constructed on the 5,000 m elevation Chajnantor plateau – near the Llano de Chajnantor Observatory and the Atacama Pathfinder Experiment. This location was chosen for its high elevation and low humidity, factors which are crucial to reduce noise and decrease signal attenuation due to Earth’s atmosphere. ALMA is expected to provide insight on star birth during the early Stelliferous era and detailed imaging of local star and planet formation.

ALMA is an international partnership among Europe, the United States, Canada, Japan, South Korea, Taiwan, and Chile. Costing about US$1.4 billion, it is the most expensive ground-based telescope in operation. ALMA began scientific observations in the second half of 2011 and the first images were released to the press on 3 October 2011. The array has been fully operational since March 2013.

The initial ALMA array is composed of 66 high-precision antennas, and operates at wavelengths of 9.6 to 0.3 millimeters (31 to 1000 GHz). The array has much higher sensitivity and higher resolution than earlier submillimeter telescopes such as the single-dish James Clerk Maxwell Telescope or existing interferometer networks such as the Submillimeter Array or the Institut de Radio Astronomie Millimétrique (IRAM) Plateau de Bure facility.

The antennas can be moved across the desert plateau over distances from 150 m to 16 km, which will give ALMA a powerful variable “zoom”, similar in its concept to that employed at the centimetre-wavelength Very Large Array (VLA) site in New Mexico, United States.

Building: The Ultimate Telescope - On a high plateau in a remote desert in northern Chile lies the largest observatory on Earth, ALMA, or Atacama Large Millimeter/Submillimeter Array.

The Sky at Night – Expedition Asteroid