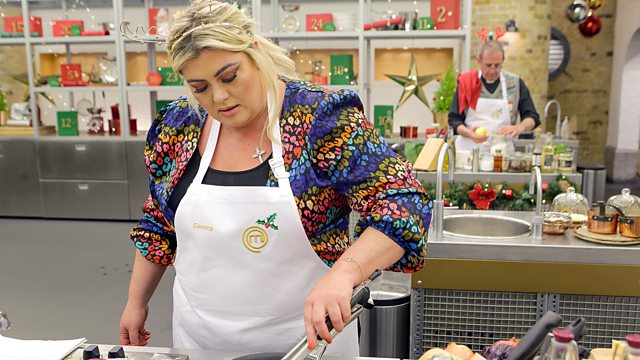 Celebrity MasterChef – Christmas Cook-Off 2021 episode 2: Deck the halls, stuff the turkey and break out the Christmas fizz as ten of the most memorable celebrities from past series come back to compete in festive-themed specials hosted by MasterChef judges Gregg Wallace and John Torode.

In the second special, reality star Gemma Collins, actor and TV presenter Joe Swash, actor and entertainer Les Dennis, singer Mica Paris and broadcaster the Rev Richard Coles compete against each other to see who can take home the title of Christmas champion and the all-new Celebrity MasterChef Golden Whisk trophy.

The celebrities face two Christmas themed tests. The first is an invention test: each contender has to recreate and embellish a Christmas recipe from somewhere around the world from ingredients and equipment found in a Secret Santa present box. Then they are challenged to cook either their ultimate Christmas dinner or an alternative Christmas meal.

Celebrity MasterChef - Christmas Cook-Off 2021 episode 2: ten of the most memorable celebrities from past series come back to compete