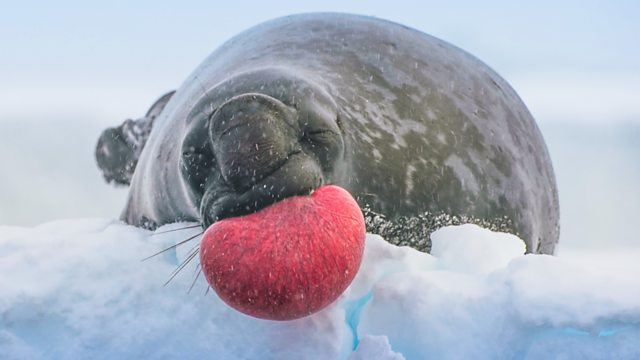 Frozen Worlds: Journeying from pole to pole, we reveal the surprising frozen worlds that exist across the planet and the remarkable animals that make them their home. We begin our journey in the far south, in the most hostile place on earth, the frozen continent of Antarctica. After being raised on the ice in winter, emperor penguin chicks find themselves abandoned by their parents in spring. To survive, they must find their own way across the treacherous sea ice to the rich waters of the Southern Ocean.

The waters surrounding Antarctica may be the richest of all, but they are also home to an exceptionally sophisticated predator, the killer whale. To reach their favoured prey, Weddell seals, a family of killer whales have learnt to generate their own waves, washing the seals off their ice floes. It’s a technique that has been passed down over generations and is coordinated by the family matriarch, who can be over 100 years old.

Leaving Antarctica and travelling north, we discover frozen habitats that are created by altitude. The greatest of these is the Himalaya, the tallest mountain range on earth, which contains so much ice and snow it is known as the third pole. In the shadow of the Himalaya lies a vast frozen grassy plain that is home to the fluffiest cat in the world, Pallas’s cat. It may have extremely dense fur, but if it’s to survive the Mongolian winter, it needs to catch lots of gerbils and voles. Easier said than done when you only have short legs and paws that are sensitive to the cold.

North of the Great Steppe lies the boreal forest, which encircles the continents of North America, Europe and Asia, and remains frozen for six months of the year. Prowling these forests in the far east of Russia is the Siberian tiger, the largest cat in the world. In winter, it is on the lookout for black bears hibernating in caves, a high-risk strategy that only a cat of this size would attempt.

Above the boreal forest, we cross into the Arctic Circle, where conditions become so extreme that trees can no longer grow. This is the tundra. Living here are relics of the last ice age, musk ox. In spring, their calves face a far greater danger than the cold, grizzly bears. Encounters can be brutal, but if just a few calves survive the gauntlet, the herd’s future is secure.

To the north of the tundra is the Arctic Ocean, the only ocean that can completely freeze over. Living here is one of the most peculiar animals on earth, the hooded seal. Males have extraordinary inflatable noses, producing a bright red balloon out of their left nostrils. One male hopes this will make him irresistible.

All of the frozen habitats share one thing in common: the threat posed by today’s climate change. Travelling to the island of Greenland, home to the largest body of ice in the northern hemisphere, we witness how global warming is melting its ice cap at faster rates than ever before, with profound consequences for global sea levels. Lastly, we visit the Arctic’s most iconic resident, the polar bear, as a mother bear struggles to provide for her cubs in a world of shrinking sea ice.

Frozen Worlds: Journeying from pole to pole, we reveal the surprising frozen worlds that exist across the planet and the remarkable animals