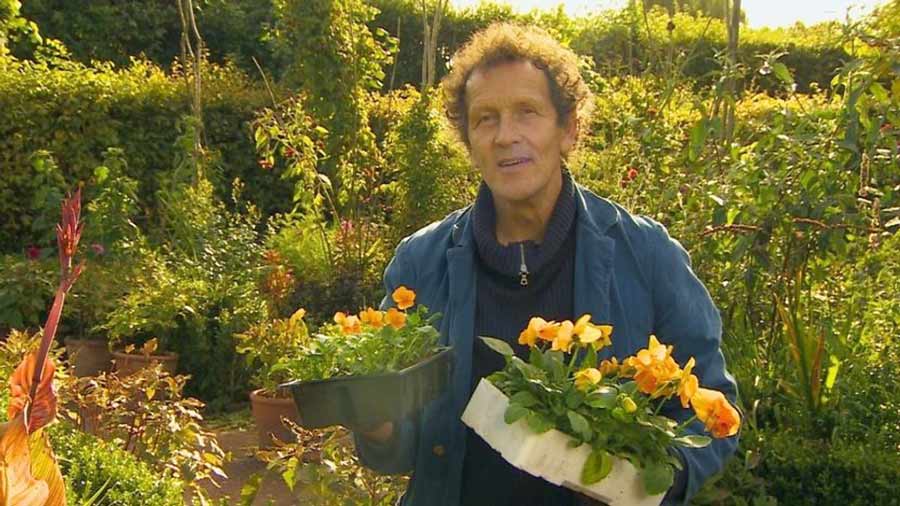 Gardeners World episode 29 2012: With Halloween just round the corner, Monty Don is harvesting his pumpkins and showing how to store them for roasts, soups and stews in the coming months.

Joe Swift visits a high-end garden in London to get some tips on how clever landscaping and the use of lighting can turn a small space into an outdoor room which can be used all year round. Carol Klein is in Wales to find out how the versatile willow can be used by the gardener to bring form and colour to winter borders. There are over 400 different kinds of willow and for millennia they have been used by man for everything from weaving to fuel.

Back at Longmeadow, Monty is planting up his containers in preparation for next spring.

If you haven’t got round to planting up your winter pots yet, it’s not too late. They’re well worth the effort and bring a much needed splash of colour in the depths of winter. Monty Don shares some timely advice on what to do.

Pumpkins and winter squashes will store for a good few months, given the right conditions. A lot depends on the variety concerned, but how you harvest them can make a big difference too. Monty gives you some handy hints on how to go about it.

Pumpkins are great fun to grow with children. They are easy to cultivate, but need a sunny position, plenty of water and shelter from cold winds. One of the finest sights of autumn is colourful pumpkins ripening in the sun. Once harvested, pumpkins can be used in delicious soup and for roasting.

Pumpkins need a sunny position, moisture-retentive soil and shelter from cold wind. Two weeks before planting or sowing seed outdoors, make individual planting pockets 1.8m (6ft) apart. Do this by making a hole about a spade’s depth and width. Backfill with a mixture of compost or well-rotted manure and soil. Sprinkle a general-purpose fertiliser over the soil.

Although it will be hard to keep up with their watering requirements, you can also grow pumpkins in growbags or containers (at least 45cm/18in wide). Plant one or two per growbag, or one per container.

In late May, start hardening off (acclimatising) indoor-raised young plants. Do this by moving them into a coldframe for a week. If you don’t have a coldframe, move plants outdoors during the day, then bring them in at night for a week. The following week, leave them out in a sheltered spot all day and night. Plant into your planting pocket in early June when the risk of frost has passed.

Gardeners World episode 29 2012: Monty Don is harvesting his pumpkins and showing how to store them for roasts, soups and stews