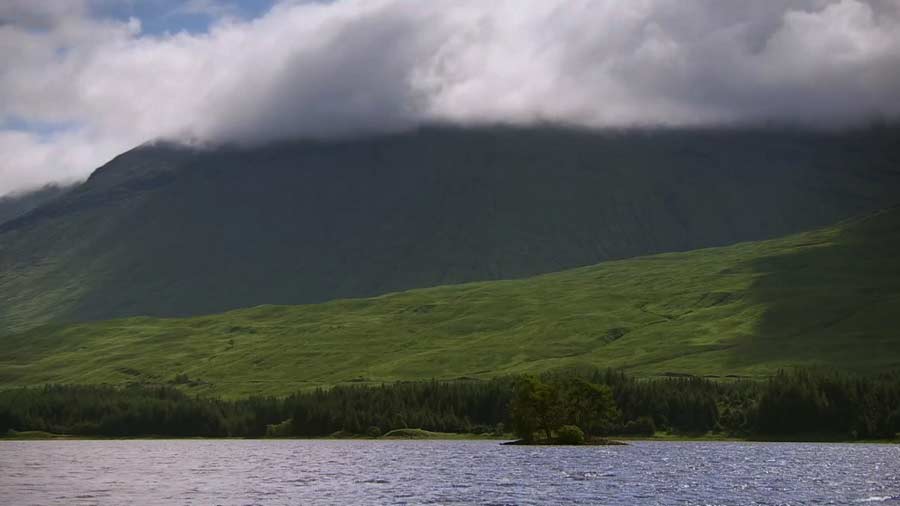 Grand Tours of Scotland’s Lochs episode 3: Paul Murton begins his Grand Tour with a chilly swim across Loch Ba, high on Rannoch Moor, struggles against the elements while trainspotting and meets some veteran Tunnel Tigers – men who tunnelled deep inside the Grampians, diverting water to hydroelectric schemes.

Loch Bà is a shallow irregular shaped freshwater loch on Rannoch Moor, Argyll and Bute, in the Scottish West Highlands, within the Highland council area of Scotland. It is about 25 km east-south-east of Glen Coe, and 20 km north of Tyndrum. There is a viewpoint on the east side of the A82 road which runs past the western end of the main loch.

Loch Bà is one of two primary lochs that sit in Rannoch Moor, lying southwest of Loch Beinn a’ Mheadhoin. Both lochs are served by the River Affric. A number of smaller lochs surround Loch Affric. At the southwestern end sits Loch Coulavie located at the base An Tudair Beag and a slightly higher elevation. Also at the southwestern end, the River Affric flows into the tiny loch of Loch Na Camaig. At the northeastern side, both the lochs Loch-Pollan Fearne and Garbe-Uisage drain into Loch Affric.

Rannoch Moor is an expanse of around 50 square miles (130 km2) of boggy moorland to the west of Loch Rannoch in Scotland, where it extends from and into westerly Perth and Kinross, northerly Lochaber (in Highland), and the area of Highland Scotland toward its south-west, northern Argyll and Bute. Rannoch Moor is designated a Site of Special Scientific Interest (SSSI) and a Special Area of Conservation. Much of the western part of the moor lies within the Ben Nevis and Glen Coe National Scenic Area,[3] one of 40 such areas in Scotland.