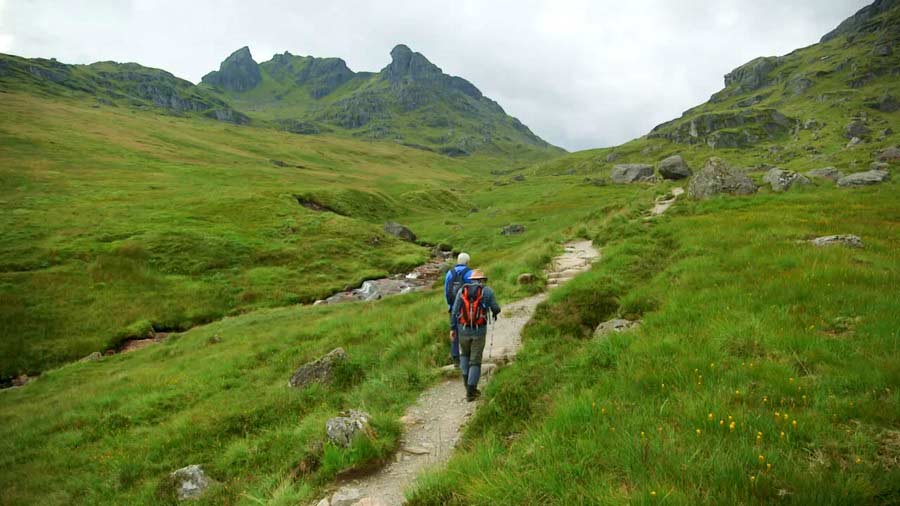 Grand Tours of Scotland’s Lochs episode 7: Paul sails along a much-loved route through the Kyles of Bute to Dunoon, discovering a secret history of WW2 bouncing bombs along the way.

From Dunoon and its connections with international singing star Harry Lauder, Paul gets nostalgic about nuclear submarines in the Holy Loch. Here he meets a man with an impressive water-powered organ. Crossing the loch, Paul beats hot steel with a blacksmith whose ancestors have been working Vulcan’s forge for six generations. Their work includes the Golden Gates at Benmore gardens, where Paul learns about a sugar daddy who collected art on a scale to rival the Tate collection. On the shores of Loch Long, Paul discovers a Viking connection in the shape of a vintage sailing boat which takes him to scale the heights of the people’s mountain – The Cobbler.

The Holy Loch is a sea loch, a part of the Cowal peninsula coast of the Firth of Clyde, in Argyll and Bute, Scotland. The “Holy Loch” name is believed to date from the 6th century, when Saint Munn landed there after leaving Ireland. Kilmun Parish Church and Argyll Mausoleum is said to stand where Saint Munn’s church was once located.

Robertson’s Yard at Sandbank, a village on the loch, was a major wooden boat building company in the late 19th and early 20th centuries. During World War II, the loch was used as a British Royal Navy submarine base. From 1961 to 1992, it was used as a United States Navy Ballistic missile submarine base. In 1992, the Holy Loch base was deemed unnecessary following the demise of the Soviet Union and subsequently closed.

Loch Long is a body of water in Argyll and Bute, Scotland. The Sea Loch extends from the Firth of Clyde at its southwestern end. It measures approximately 20 miles (32 km) in length, with a width of between 1 and 2 miles (1.6 and 3.2 km). The loch also has an arm, Loch Goil, on its western side.

Loch Long forms part of the coast of the Cowal peninsula and forms the entire western coastline of the Rosneath Peninsula. Loch Long was historically the boundary between Argyll and Dunbartonshire. However, in 1996 boundary redrawing meant that it moved wholly within the council area of Argyll and Bute.

Grand Tours of Scotland's Lochs episode 7: Paul sails along a much-loved route through the Kyles of Bute to Dunoon, discovering a secret history of WW2