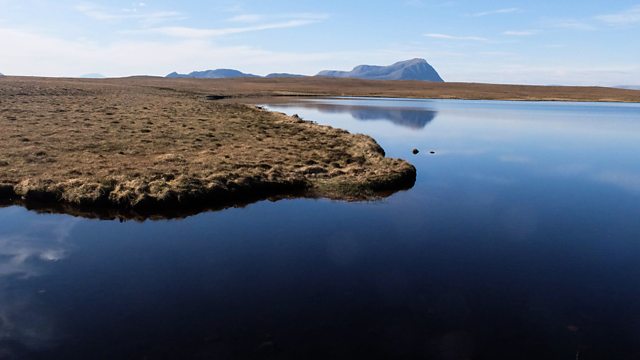 Grand Tours of Scotland’s Lochs episode 8: Paul travelling hopefully from the shores of Loch Hope to the glorious and lonely expanse of Sandwood Bay on the far north west of Scotland. Along the way he encounters a Pictish king and an ancient broch, discovers wartime secrets in Loch Eriboll and a hidden monument to a naval disaster.

The single-track road around Loch Eriboll still uses passing places to allow overtaking. It was on this very same road in the 1960s that John Lennon of the Beatles crashed his car. Reaching the north coast of Scotland, Paul plunges underground at Smoo Cave where he crosses a subterranean loch before encountering the Devil himself. From the tidal sands of the Kyle of Durness, Paul heads to Kinlochbervie where he learns the art of drystone dyking from a master craftsman, before trekking over the moors to the surf of distant Sandwood Bay.

Sandwood Bay is a natural bay in Sutherland, on the far north-west coast of mainland Scotland. It is best known for its remote 1 mile (1.6 km) long beach and Am Buachaille, a sea stack, and lies about 5 miles (8.0 km) south of Cape Wrath. Behind the bay’s large dunes, stretches the freshwater Sandwood Loch.

Though remote, and with no road access, the bay can be reached by a 4 miles (6.4 km) path leading from the gravel car park at the hamlet of Blairmore. Sandwood Bay is part of the Sandwood Estate which is run by the John Muir Trust. The beach is considered to be one of the cleanest and most unspoilt beaches in the whole of mainland Britain.

Because of its isolation, the bay has become distinctly romanticised with several legends accorded to it. One legend tells of a mermaid spotted on one of the two jutting rocks there a hundred years ago. Alexander Gunn, a local farmer, was on the beach, searching for one of his sheep, when his dog made a startling discovery. One man, MacDonald Robertson, often spoke of the time he met Mr Gunn in 1939.

Loch Eriboll (Scottish Gaelic: “Loch Euraboil”) is a 16 km (9.9 mi) long sea loch on the north coast of Scotland, which has been used for centuries as a deep water anchorage as it is safe from the often stormy seas of Cape Wrath and the Pentland Firth. It is named after the village of Eriboll on its eastern shore.

Bronze Age remains can be found in the area, including a souterrain and a very well preserved wheelhouse on the hillside above the west shore. A small scale lime industry developed here in the 19th century.

Paul travelling hopefully from the shores of Loch Hope to the glorious and lonely expanse of Sandwood Bay on the far north west of Scotland.