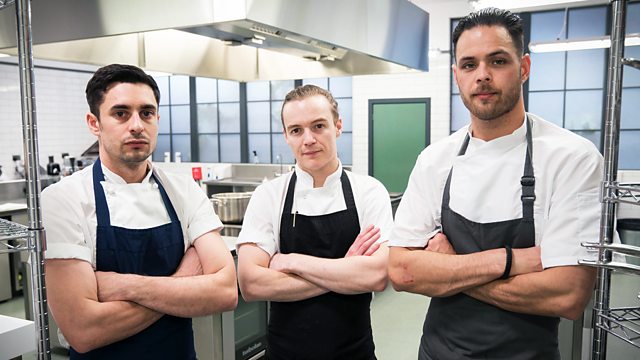 This week on Great British Menu episode 22 2019 it is the heat for the Northern Ireland region. Competing are three exciting new chefs to the competition, all at the top of their culinary game. Chris McClurg from County Down is head chef at Paul Ainsworth’s Michelin-starred restaurant No. 6, in Padstow, Cornwall. Alex Greene from County Down is head chef at Michelin-starred Deane’s Eipic in Belfast and Glen Wheeler from Fermanagh is chef patron at the Michelin-recommended 28 Darling Street in Enniskillen.

The three chefs begin by cooking their starters for a surprise veteran of the competition. Chris’ dish Brixton Academy Through the Years is his refined take on the classic lamb, post-gig junk food he ate after nights out at Brixton Academy.

Can his aged hogget breast, crisp oyster, glazed sweetbread and charcoal grilled flatbread elevate this late night favourite to a Banquet worthy dish? Alex is taking inspiration for his starter Breakfast: Oh You Pretty Things from the artists over the decades that have sung about the first meal of the day. He is attempting to take some of the key flavours of a traditional British breakfast – egg, mushroom, soda bread and bacon – and really make them sing. Glen’s starter is an ode to British hip hop and, fittingly, puts rabbit in the limelight with a stuffed saddle, cep and rabbit ravioli all united with a wild mushroom foam and black garlic puree.

The chefs then move on to cook their fish courses. Chris is using scallops for his Oasis-inspired dish Champagne Supernova, while Alex is including lobster, cockles, mussels and salmon in his dish Coney Island and Dundrum Bay, a tribute to Van Morrisson, and Glen is hoping his Procul Harem tribute A Whiter Shade of Pale, featuring john dory, will be all white on the night.

This week on Great British Menu episode 22 2019 it is the heat for the Northern Ireland region. Competing are three exciting new chefs to the competition.