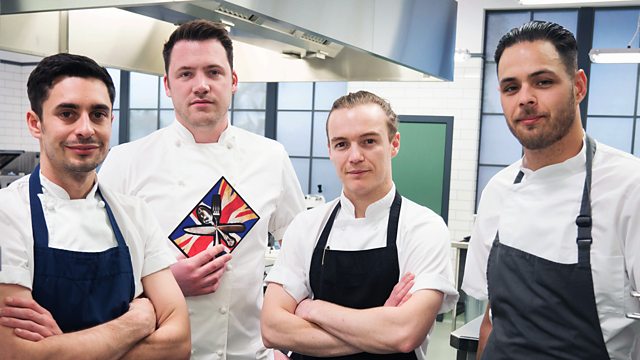 Great British Menu episode 23 2019: the chefs are halfway through the Northern Ireland heat. Today they serve their mains and desserts to veteran Tommy Banks hoping to claim one of the two places up for grabs at the regional final.

Chris is cooking his interpretation of the classic beef dish Tournedos Rossini using guinea fowl. His inspiration is Proms in the Park and the British artists who mix classical and modern music styles. Alex’s dish commemorates his late brother and the song by Northern Ireland artist Donna Taggart that he associates with the difficult time of his death.

Glen creates a chicken dish that he serves in a model of the Pyramid Stage at Glastonbury complete with stage smoke. He struggles to serve on time for the third course in a row. It is down to dessert to decide which of the three chefs will be going home and which two will get to cook for the title of regional champion in the judge’s chamber.

Dessert promises to be quite the battle, and two of our chefs struggle with the technical elements of their dishes. Chris’s dessert is inspired by the music and food heritage of London’s Camden Town and pairs muscovado monkey bread with soft serve vanilla ice cream. But when he can’t quite get to grips with the ice cream machine and his dish looks in jeopardy, the threat of going home seems very real all of a sudden.

Alex’s dish inspired by The Beatles and their Apple record label promises to reimagine the humble apple as an edible sculpture. However, he misjudges critical temperatures and struggles to deliver the dish he’d hoped to. Glen, on the other hand, sails through and banishes his timing demons to serve his pavlova based homage to his favourite band Oasis that he calls Champagne Pavlova.

Great British Menu episode 23 2019: the chefs are halfway through the Northern Ireland heat, today they serve their mains and desserts.