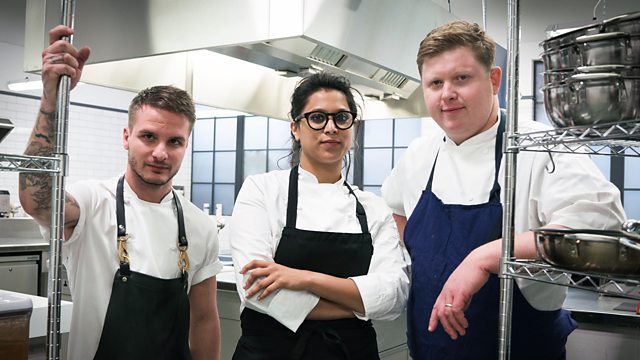 Great British Menu episode 7 2019: Two returnees and a newcomer make their way to the kitchen for the central heats. Returner Sabrina Gidda from Wolverhampton is executive chef at AllBright, a women-only club in London. Newcomer Kray Treadwell from Solihull is head chef at Man Behind the Curtain in Leeds. Ryan Simpson-Trotman, making his third appearance in the competition, runs his own restaurant, Orwells in Oxfordshire.

How will they handle this year’s pop music brief and what will their surprise veteran judge think of their efforts?

Newcomer Kray brings an urban edge to proceedings, with a starter inspired by grime music called Fire in the Booth. It combines hot sauce, veal sweetbreads and tuna belly. Returner Sabrina is compiling a dish of her favourite ingredients, including pasta and ox cheek, for her Italian inspired starter called My Mixtape. Fellow returner Ryan opens up with a starter that he hopes will have some sway, combing pigeon and beetroot: he has taken inspiration from the Deep Purple track Smoke on the Water. The competition immediately heats up when both he and Sabrina misjudge their pressure cookers. Will they be able to salvage their starters?

After receiving the veteran judge’s scores for their starters, the competition ramps up a notch as the rival chefs move on to the fish course. Newcomer Kray is pulling all the stops out with a plate inspired by punk music called Disdain for Orthodoxy, which includes oysters, mussels, skate, ray and turbot. Controversially Sabrina is re-releasing a dish she brought to last year’s competition. She has renamed it Brimful of Asha and it combines curry with crab, turbot and a poha rice salad. Will the veteran judge object? Meanwhile Ryan getting soulful with a plate that utilises Dover sole, verjus sauce and grapes, called Fishing for a 45.

Great British Menu episode 7 2019: Two returnees and a newcomer make their way to the kitchen for the central heats.