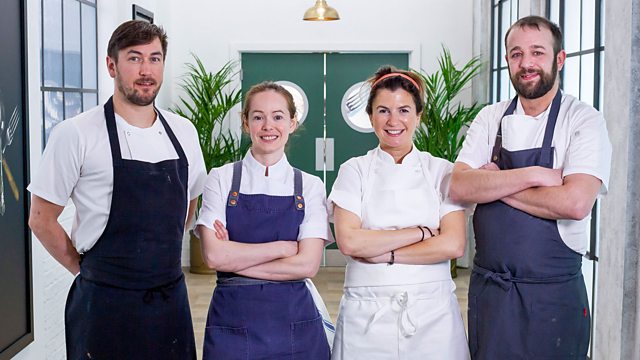 Great British Menu episode 7 2020 – Scotland – Starter & Fish Courses: This week, the battle is on with the heats for Scotland. Competing for the top spot are two returning chefs and two newcomers to the competition, representing some of the most formidable culinary talents from Scotland.

Maverick chef Gordon Jones is returning for another crack at the contest after being a runner-up in the regional final last year. Since 2016, his restaurant Gordon Jones in Bath has been featured in the Michelin guide and Hardens Top 10 Restaurants Outside London, and he is hoping his experimental style will see him through this time around. Irvine-born Ross Bryans is also returning after being runner-up at the regional final two years ago.

He has worked at some of the most renowned Michelin restaurants in the UK and is now head chef of London’s Les 110 de Taillevent with its modern French style. Newcomer Roberta Hall from Edinburgh has worked for Michelin-starred Scottish chef Tom Kitchin and is now chef patron of The Little Chartroom in her home town. She is hoping to light up the competition with her traditional Scottish cooking style, influenced by French techniques. London-born Amy Elles has made her home on the east coast of Scotland with her family and is chef patron of The Harbour Café in Fife with her husband. Amy is out to knock out her rivals with her love of Scottish produce and light, elegant cooking.

This week, the chefs are tasked with honouring the theme of heroes and villains in children’s literature, which ties in with some of the great authors that spent time in Scotland. Newcomer Roberta is making a venison tartare with smoked celeriac remoulade, which pays homage to JK Rowling’s wizard hero in Harry Potter and the Goblet of Fire. Returner Ross is celebrating Edinburgh-born author Kenneth Grahame with a Wind in the Willows-style riverside picnic for lovable heroes Ratty and Mole, complete with sourdough baguette and chicken terrine.

Experimental chef Gordon is making snail pakoras inspired by Jill Murphy’s The Worst Witch, and finally, mother-of-three Amy is making a dish full of foraged forest elements that bring to life a campfire scene and celebrate Abi Elphinstone’s The Dream Snatcher. The chefs’ fate depends on each and every point they get from their veteran, and with one person leaving after the fish course, nerves are running high.

Great British Menu episode 7 2020 - Scotland - Starter & Fish Courses: This week, the battle is on with the heats for Scotland.