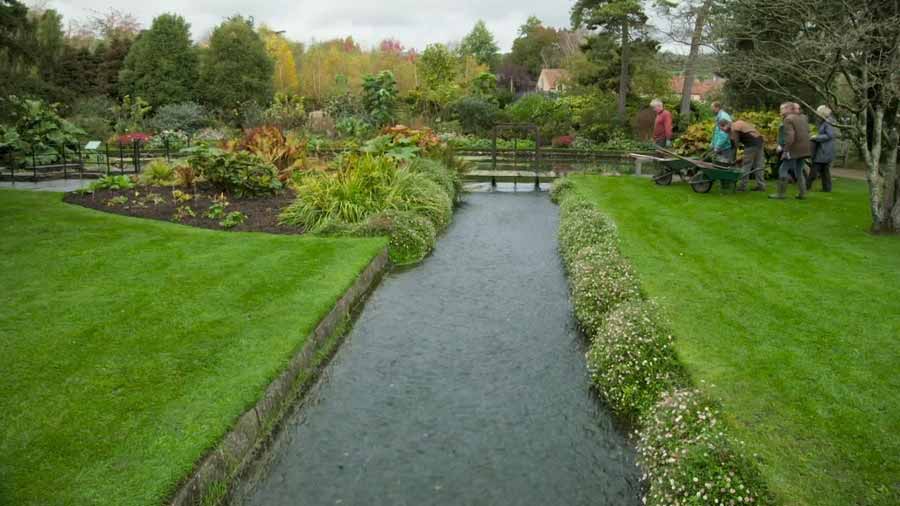 At the Bishop’s Palace in Somerset, Alexander discovers why this place has been sacred for centuries and helps to create a colourful and uplifting work of art. Arit learns how the ancient trees at Scone Palace in Scotland will be given a new lease of life, and Alexander heads to his home county of Northumberland to tour a garden where humour is being used to plant seeds of change in the community.

The Bishop’s Palace and accompanying Bishops House at Wells in the English county of Somerset, is adjacent to Wells Cathedral and has been the home of the Bishops of the Diocese of Bath and Wells for 800 years. It has been designated by English Heritage as a Grade I listed building.

Building of the palace started around 1210 by Bishops Jocelin of Wells and Reginald Fitz Jocelin. The chapel and great hall were added by Bishop Robert Burnell between 1275 and 1292. The walls, gatehouse and moat were added in the 14th century by Bishop Ralph of Shrewsbury. The Bishops House was added in the 15th century by Bishop Thomas Beckington. The great hall later fell into disrepair and was partially demolished around 1830.

The palace was originally surrounded by a medieval deer park. When the walls were built, streams were diverted to form the moat as a reservoir. In the 1820s, the grounds within the walls were planted and laid out as pleasure grounds by Bishop George Henry Law, who created a reflecting pond near the springs. Parts of the buildings are still used as a residence by the current bishop, however much of the palace is now used for public functions and as a tourist attraction.

Scone Palace is a Category A listed historic house and 5 star tourism attraction near the village of Scone and the city of Perth, Scotland. Built of red sandstone with a castellated roof, it is one of the finest examples of late Georgian Gothic style in the United Kingdom.

A place steeped in history, Scone was originally the site of an early Christian church, and later an Augustinian priory. In the 12th century, Scone Priory was granted abbey status and as a result an Abbot’s residence – an Abbot’s Palace – was constructed. It is for this reason (Scone’s status as an abbey) that the current structure retains the name “Palace”. Scone Abbey was severely damaged in 1559 during the Scottish Reformation after a mob whipped up by the famous reformer, John Knox, came to Scone from Dundee.

Having survived the Reformation, the Abbey in 1600 became a secular Lordship (and home) within the parish of Scone, Scotland. The Palace has thus been home to the Earls of Mansfield for over 400 years. During the early 19th century the Palace was enlarged by the architect William Atkinson. In 1802, David William Murray, 3rd Earl of Mansfield, commissioned Atkinson to extend the Palace, recasting the late 16th-century Palace of Scone. The 3rd Earl tasked Atkinson with updating the old Palace whilst maintaining characteristics of the medieval Gothic abbey buildings it was built upon, with the majority of work finished by 1808.