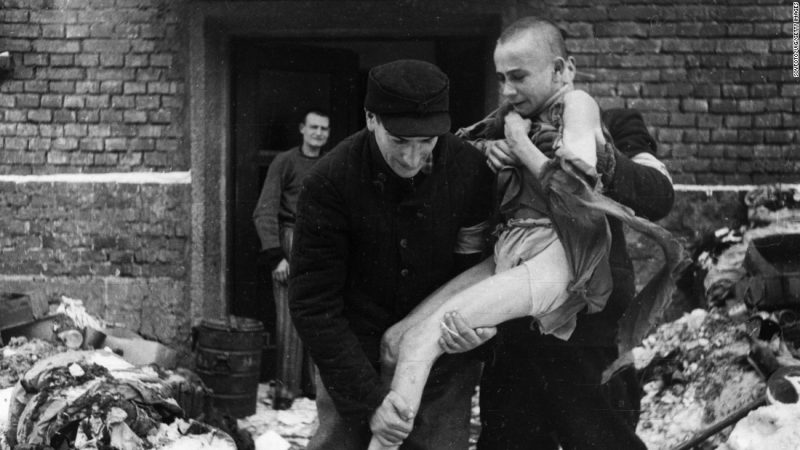 This chilling, vitally important documentary was produced to mark the 40th anniversary of the liberation of Auschwitz Concentration Camp. The film contains unedited, previously unavailable film footage of this concentration camp shot by the Soviet military forces between January 27 and February 28, 1945 and includes an interview with Alexander Voronsov, the cameraman who shot the footage.

The horrifying images include: survivors; camp visit by Soviet investigation commission; criminal experiments; forced laborers; evacuation of ill and weak prisoners with the aid of Russian and Polish volunteers; aerial photos of the IG Farben Works in Monowitz; and pictures of local people cleaning up the camp under Soviet supervision.

Auschwitz I was first constructed to hold Polish political prisoners, who began to arrive in May 1940. The first extermination of prisoners took place in September 1941. Auschwitz II–Birkenau went on to become a major site of the Nazi’s Final Solution to the Jewish Question during the Holocaust. From early 1942 until late 1944, transport trains delivered Jews to the camp’s gas chambers from all over German-occupied Europe, where they were killed en masse with the pesticide Zyklon B. An estimated 1.3 million people were sent to the camp, of whom at least 1.1 million died.

Around 90 percent of those were Jews; approximately one in six Jews killed in the Holocaust died at the camp. Others deported to concentration camp included 150,000 Poles, 23,000 Romani and Sinti, 15,000 Soviet prisoners of war, 400 Jehovah’s Witnesses, and tens of thousands of others of diverse nationalities. Many of those not killed in the gas chambers died of starvation, forced labor, infectious diseases, individual executions, and medical experiments.