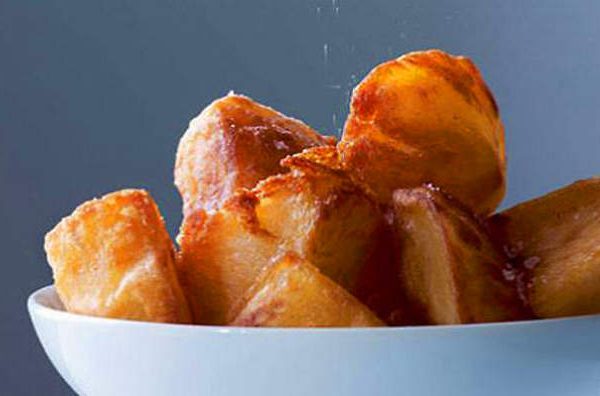 In How to Cook Like Heston ep 6, Heston challenges the way we cook the humble spud. Potatoes hold together most meals in Britain but surely there is more to spuds than mashing, boiling or roasting?

Heston will shine a light on the neglected champion of the home cook and take viewers through a radical compendium of tips and techniques to transform your Maris Pipers into a mouth-watering main course – from his legendary Triple Cooked Chips to Potato Donuts, Potato Skin Jam and the perfect mash.

This recipe makes roast potatoes just the way I like them – with a crisp, glass-like crust and a fluffy interior. The key is to cut the potatoes so they have lots of sharp edges then to cook them until they are almost falling apart. Don’t scrimp on the amount of oil added to the pan – it is the fat gathering in the cracks that makes the potatoes so crispy. Olive oil works really well or you can use goose fat or beef dripping, but they will give a different flavour. The garlic and rosemary are optional. You can either add them to the water when boiling the potatoes or to the roasting tray 5 minutes before the end of the cooking time.

The technique in this recipe, i.e. cooking waxy potatoes at a very specific temperature, is designed to hold on to the starch in the potatoes and prevent it from leaking out and turning the potato gluey. The end product is the creamiest smoothest pommes purées ever. If you want to be extra decadent, go 50:50 potato to butter. Adding lime jelly cubes to the mash for a fresh burst of flavour is optional.

Donuts are normally made with flour but substituting some of the flour with potato flesh gives a lighter, springier donut which can then be coated in crystallised potato and dipped in potato milk jam (follow the link below to my recipe) … all this from the humble spud! The coloured, exploding coating is really for the kids but I love it too!

These chips are one of my proudest legacies! You see them on menus up and down the country now but the original recipe came out of endless experimenting at home long before I even opened the Fat Duck. The first secret is cooking the chips until they are almost falling apart as the cracks are what makes them so crispy. The second secret is allowing the chips to steam dry then sit in the freezer for an hour to get rid of as much moisture as possible. The final secret is to cook the chips in very hot oil for a crispy, glass-like crust.

Title
How to Cook Like Heston ep 6 – Potatoes
Description

In How to Cook Like Heston ep 6, Heston challenges the way we cook the humble spud. Potatoes hold together most meals in Britain