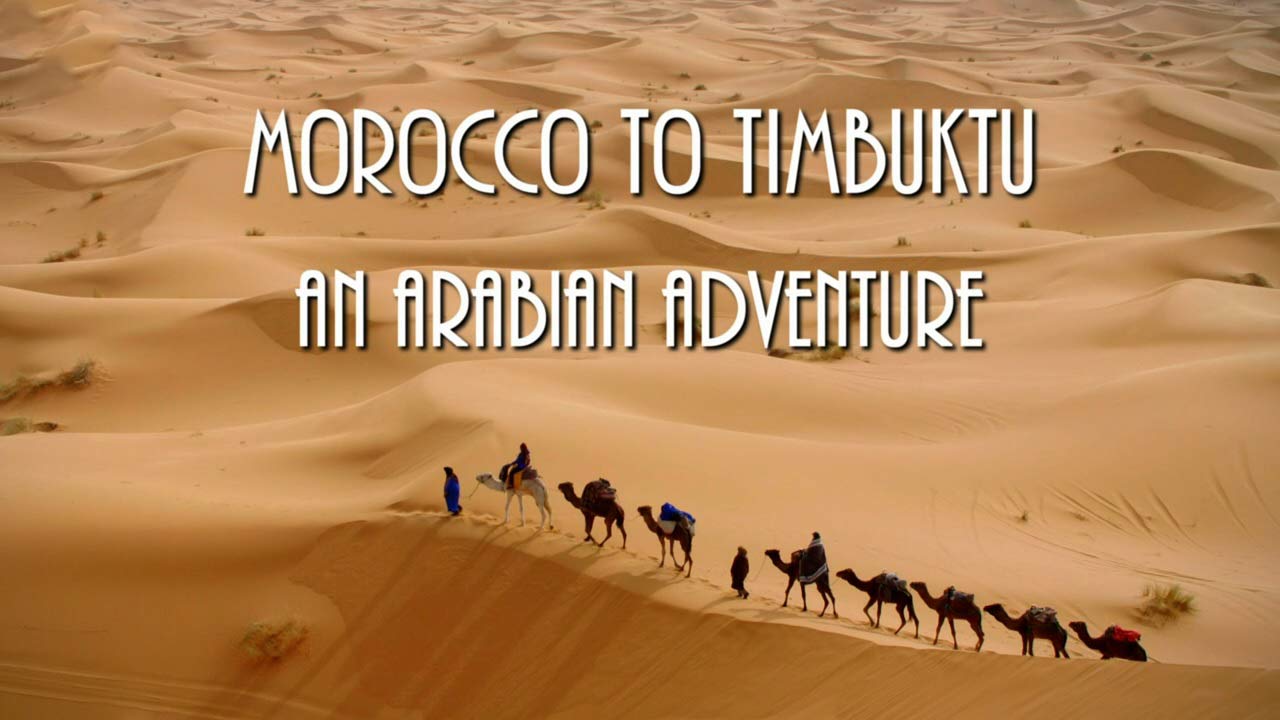 Morocco to Timbuktu: An Arabian Adventure episode 1: Timbuktu – a place so mysterious, mythical and far, far away that it has become a legendary destination. Alice Morrison, Arabist, writer, explorer and Marrakech resident, follows what was once one of the world’s richest trading networks – the infamous salt roads – across north Africa from the top of Morocco to the fabled sandstone city of Timbuktu. Trekking 2,000 miles across some of the deadliest landscapes on earth, Alice journeys deep into the history, culture and civilisation of both ancient and modern north Africa.

Standing at the crossroads between north and sub-Saharan Africa, and straddling the vast Sahara Desert and the great River Niger, the legendary trading post of Timbuktu, now one of the most dangerous places on earth, was founded over a thousand years ago, and its wealth was built on two precious commodities – gold and salt. Over the centuries, caravans with thousands of camels passed regularly between Timbuktu and Morocco. They were led across the deadly trans-Saharan ‘salt roads’ by a desert tribe called the Tuareg, who still patrol the desert today.

Setting off from Tangier, Alice learns how gold was in high demand in north Africa, to be minted into coins and adorn palaces. Its source was the gold mines of sub-Saharan Africa, and so the routes across the desert were forged. Hitching a ride in a crowded taxi, Alice passes through the Islamic city of Fes, home to the world’s oldest university, where she stays in a caravanserai, the ancient traders’ version of a motel with mule and camel parking, and helps prepare the merchant’s dish of the day, camel meatballs.

Next, she catches the famous hippy train, the Marrakech Express, to the other northern terminus of trans-Saharan trade, the market town of Marrakech, where she learns how to treat leather the ancient way by wading up to her waist in vats of cow hide, poison and… pigeon poo. And in the grand square, Djemaa El Fnaa, she hears tall tales of the traders of old and their travels across the Sahara.

Continuing on foot, she treks in snow and storms across the Atlas Mountains dotted with Berber villages; the Berbers, or Amazigh, are the indigenous people of Morocco. On the other side of the Atlas, Alice discovers ancient caves of salt, the commodity which gave the salt roads their name.

Further south, she travels through valleys lined with casbahs, fortresses where the traders could stay in safety along the route. In the barren, unforgiving heat of the Jebel Saghro desert, she enlists the help of Berber nomads. They still graze their animals there and live the same traditional lifestyle. They help her on her way to the ancient city of Sijilmasa, whose forgotten ruins sit on the edge of the great Sahara Desert. It’s a lost city, which was once a great trading post, a sanctuary for merchants arriving after the long trek across the Sahara from Timbuktu.

Morocco to Timbuktu: An Arabian Adventure episode 1: Timbuktu - a place so mysterious, mythical and far, far away that it has become a legendary destination.