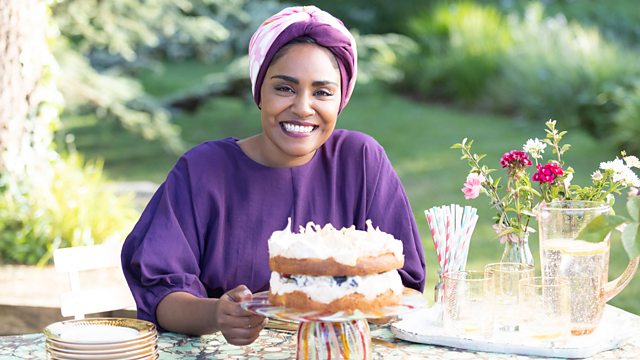 Nadiya’s Everyday Baking episode 1: Everyday treats for an easy afternoon tea, from striped meringue lollipops to coffee cake with dalgona coffee cream and dreamy butterscotch cheesecake bars.  Nadiya Hussain starts the series with her take on the quintessentially British afternoon tea. Every recipe will offer an exciting twist on an old-school classic that’s so easy it could be whipped up every day of the week.

Inspired by a lockdown social media craze, a traditional coffee cake is transformed by a deliciously light dalgona coffee cream topping – the method is ingenious, as it doesn’t actually contain any cream! Nadiya then shares her pretty-as-a-picture meringue lollipops, which have a colourfully striped crisp shell and a raspberry-infused white chocolate centre.

Next, Nadiya knocks up cheesecake like you’ve never seen before with her super indulgent but sensationally moreish butterscotch cheesecake bars. Puff pastry, butterscotch cream and layers of crumbly biscuit create an epic teatime treat. Finally, Nadiya gives the most famous of afternoon teas a Bengali makeover, offering up her cream tea in pudding form. With cardamom-infused scones that crown a rose, rhubarb and strawberry jam bake adorned with pistachios and served with lashings of clotted cream, this is a cream tea with a difference.

Across the series, Nadiya also celebrates bakers from across Britain, shining a light on their favourite everyday bakes. In this episode, award-winning allergy-conscious baker Mina Said-Allsopp shares her secret to a gluten-free chocolate sourdough – just one of the superb recipes born out of her mission to bring delicious sweet and savoury bakes to the gluten intolerant.