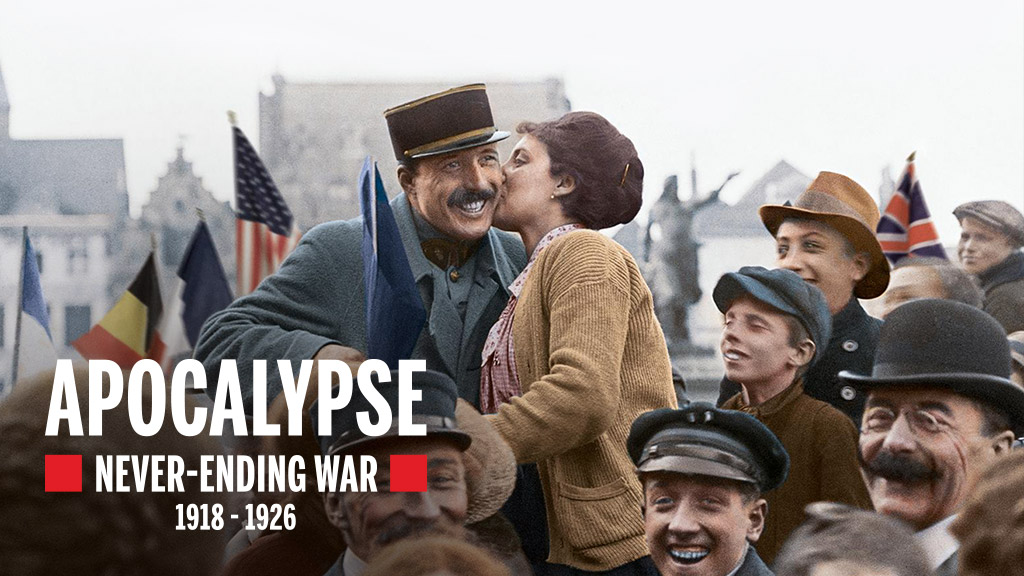 Never Ending War 1918-1926 episode 1 – Vengeance: November 11, 1918. The First World War is over. Survivors greet the end of hostilities with wild celebrations. But in central Europe, in Germany, Russia, and Hungary, the Communist revolution threatens to sweep all before it. At the Palace of Versailles, the victors draw up the terms of the peace treaty. Traumatized by the fighting and the scourge of the Spanish flu, demobilized soldiers return home to the four corners of a war-shattered world.

November 11, 1918, the world emerges from the most horrific conflict ever known. While world leaders of the victorious countries design a new world order, traumatized societies struggle to find their way.

World War I was a global war originating in Europe that lasted from 28 July 1914 to 11 November 1918. Contemporaneously known as the Great War or “the war to end all wars”, it led to the mobilisation of more than 70 million military personnel, including 60 million Europeans, making it one of the largest wars in history.

On 28 June 1914, Gavrilo Princip, a Bosnian Serb Yugoslav nationalist and member of the Serbian Black Hand military society, assassinated the Austro-Hungarian heir Archduke Franz Ferdinand in Sarajevo, leading to the July Crisis. In response, Austria-Hungary issued an ultimatum to Serbia on 23 July. Serbia’s reply failed to satisfy the Austrians, and the two moved to a war footing. A network of interlocking alliances enlarged the crisis from a bilateral issue in the Balkans to one involving most of Europe.

By July 1914, the great powers of Europe were divided into two coalitions: the Triple Entente, consisting of France, Russia, and Britain; and the Triple Alliance of Germany, Austria-Hungary, and Italy. The Triple Alliance was only defensive in nature, allowing Italy to stay out of the war until April 1915, when it joined the Allied Powers after its relations with Austria-Hungary deteriorated. Russia felt it necessary to back Serbia, and approved partial mobilisation after Austria-Hungary shelled the Serbian capital of Belgrade, which was a few miles from the border, on 28 July. Full Russian mobilisation was announced on the evening of 30 July; the following day, Austria-Hungary and Germany did the same, while Germany demanded Russia demobilise within twelve hours.

When Russia failed to comply, Germany declared war on Russia on 1 August in support of Austria-Hungary, the latter following suit on 6 August; France ordered full mobilisation in support of Russia on 2 August. In the end, World War I would see the continent of Europe split into two major opposing alliances; the Allied Powers, primarily composed of the United Kingdom of Great Britain & Ireland, the United States, France, the Russian Empire, Italy, Japan, Portugal, and the many aforementioned Balkan States such as Serbia and Montenegro; and the Central Powers, primarily composed of the German Empire, the Austro-Hungarian Empire, the Ottoman Empire and Bulgaria.

The Treaty of Versailles was the most important of the peace treaties that brought World War I to an end. The Treaty ended the state of war between Germany and the Allied Powers. It was signed on 28 June 1919 in the Palace of Versailles, exactly five years after the assassination of Archduke Franz Ferdinand, which had directly led to the war. The other Central Powers on the German side signed separate treaties. Although the armistice, signed on 11 November 1918, ended the actual fighting, it took six months of Allied negotiations at the Paris Peace Conference to conclude the peace treaty. The treaty was registered by the Secretariat of the League of Nations on 21 October 1919.

Of the many provisions in the treaty, one of the most important and controversial required “Germany accept the responsibility of Germany and her allies for causing all the loss and damage” during the war (the other members of the Central Powers signed treaties containing similar articles). This article, Article 231, later became known as the War Guilt clause. The treaty required Germany to disarm, make ample territorial concessions, and pay reparations to certain countries that had formed the Entente powers.

In 1921 the total cost of these reparations was assessed at 132 billion gold marks (then $31.4 billion or £6.6 billion, roughly equivalent to US$442 billion or UK£284 billion in 2021). At the time economists, notably John Maynard Keynes (a British delegate to the Paris Peace Conference), predicted that the treaty was too harsh—a “Carthaginian peace”—and said the reparations figure was excessive and counter-productive, views that, since then, have been the subject of ongoing debate by historians and economists. On the other hand, prominent figures on the Allied side, such as French Marshal Ferdinand Foch, criticized the treaty for treating Germany too leniently.