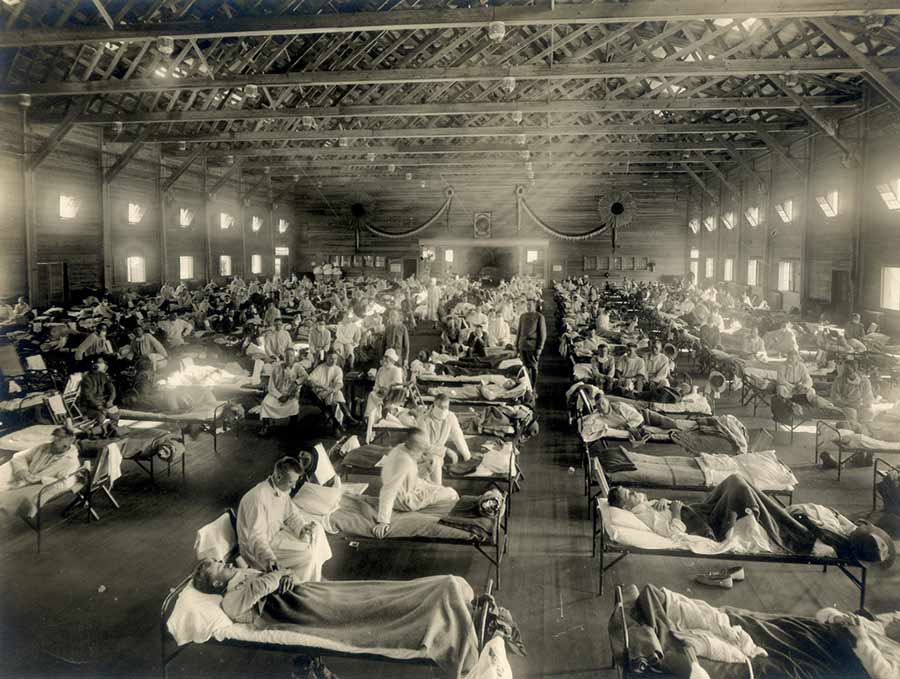 The Flu That Killed 50 Million: It is 1918 and the end of WWI. Millions have died, and the world is exhausted by war. But soon a new horror is sweeping the world, a terrifying virus that will kill more than fifty million people – the Spanish flu.

Using dramatic reconstruction and eyewitness testimony from doctors, soldiers, civilians and politicians, this one-off special brings to life the onslaught of the disease, the horrors of those who lived through it and the efforts of the pioneering scientists desperately looking for the cure.

Narrated by Christopher Eccleston, the film also asks whether, a century later, the lessons learnt in 1918 might help us fight a future global flu pandemic.

The 1918 influenza pandemic (colloquially known as Spanish flu) was an unusually deadly influenza pandemic, the first of the two pandemics involving H1N1 influenza virus, with the second being in 2009. It infected 500 million people around the world, including people on remote Pacific islands and in the Arctic. The death toll is estimated to have been 50 million, and possibly as high as 100 million (three to five percent of Earth’s population at the time), making it one of the deadliest epidemics in human history. Historical and epidemiological data are inadequate to identify with certainty the pandemic’s geographic origin.

The major troop staging and hospital camp in Étaples, France, was identified by researchers as being at the center of the Spanish flu. The research was published in 1999 by a British team, led by virologist John Oxford. In late 1917, military pathologists reported the onset of a new disease with high mortality that they later recognized as the flu. The overcrowded camp and hospital was an ideal site for the spreading of a respiratory virus.

The hospital treated thousands of victims of chemical attacks, and other casualties of war. 100,000 soldiers were in transit through the camp every day. It also was home to a live piggery, and poultry was regularly brought in for food supplies from surrounding villages. Oxford and his team postulated that a significant precursor virus, harbored in birds, mutated and then migrated to pigs kept near the front.

An influenza pandemic is an epidemic of an influenza virus that spreads on a worldwide scale and infects a large proportion of the world population. In contrast to the regular seasonal epidemics of influenza, these pandemics occur irregularly – there have been about 9 influenza pandemics during the last 300 years.

Pandemics can cause high levels of mortality, with the 1918 Spanish flu pandemic being the worst in recorded history; this pandemic was estimated to be responsible for the deaths of approximately 50–100 million people. There have been about three influenza pandemics in each century for the last 300 years, the most recent one being the 2009 flu pandemic.

Influenza pandemics occur when a new strain of the influenza virus is transmitted to humans from another animal species. Species that are thought to be important in the emergence of new human strains are pigs, chickens and ducks.

These novel strains are unaffected by any immunity people may have to older strains of human influenza and can therefore spread extremely rapidly and infect very large numbers of people. Influenza A viruses can occasionally be transmitted from wild birds to other species causing outbreaks in domestic poultry and may give rise to human influenza pandemics. The propagation of influenza viruses throughout the world is thought in part to be by bird migrations, though commercial shipments of live bird products might also be implicated, as well as human travel patterns.

Influenza, commonly known as “the flu”, is an infectious disease caused by an influenza virus. Symptoms can be mild to severe. The most common symptoms include: high fever, runny nose, sore throat, muscle and joint pain, headache, coughing, and feeling tired. These symptoms typically begin two days after exposure to the virus and most last less than a week.

The cough, however, may last for more than two weeks. In children, there may be diarrhea and vomiting, but these are not common in adults. Diarrhea and vomiting occur more commonly in gastroenteritis, which is an unrelated disease and sometimes inaccurately referred to as “stomach flu” or the “24-hour flu”.  Complications of influenza may include viral pneumonia, secondary bacterial pneumonia, sinus infections, and worsening of previous health problems such as asthma or heart failure.

Delphi – The Bellybutton of the Ancient World

1989: The Year that Made the Modern World episode 5