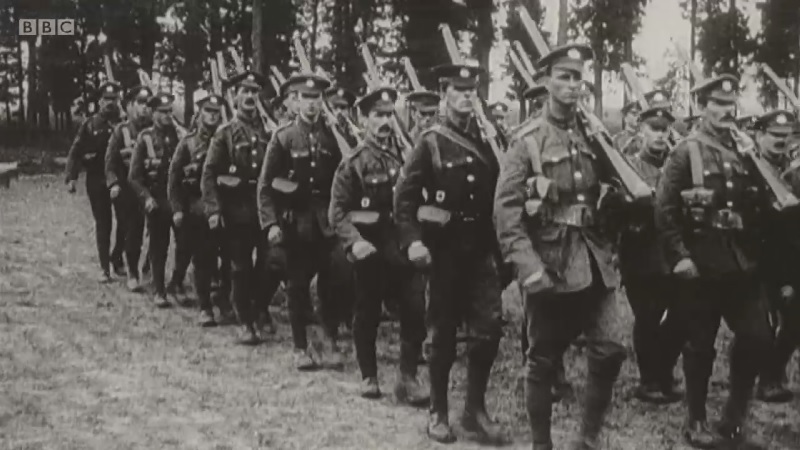 Vivid and heartbreaking stories told by the last Tommies – filmed in their 90s and 100s – remembering life and death in World War I, illustrated with powerful archive. The three-part series is the result of a uniquely important oral history project to record the experiences of men and women who lived through Great War.

This episode tells the story of the first years of war in 1914 and 1915, culminating in the Battle of Loos, when the Pals Battalions, who had enthusiastically volunteered to serve, had their first taste of the horror of mass industrialised warfare. We see how the Tommies survived and kept their spirits up in the trenches with death all around them. And we see how families at home faced up to the absence and the tragic loss of husbands, fathers, sweethearts and sons. Yet despite this shock they still had to work incredibly long hours in the munitions factories and ‘keep the home fires burning.’ War wasn’t the glorious adventure that so many had imagined.

Tommy Atkins or Thomas Atkins has been used as a generic name for a common British soldier for many years. The origin of the term is a subject of debate, but it is known to have been used as early as 1743. A letter sent from Jamaica about a mutiny amongst the troops says “except for those from N. America ye Marines and Tommy Atkins behaved splendidly”.

A common belief is that the name was chosen by Arthur Wellesley, 1st Duke of Wellington after having been inspired by the bravery of a soldier at the Battle of Boxtel in 1794 during the Flanders Campaign. After a fierce engagement, the Duke, in command of the 33rd Regiment of Foot, spotted the best man-at-arms in the regiment, Private Thomas Atkins, terribly wounded. The private said “It’s all right, sir. It’s all in a day’s work” and died shortly after. According to the Imperial War Museum, this theory has Wellington choosing the name in 1843.

According to J. H. Leslie, writing in Notes and Queries in 1912, “Tommy Atkins” was chosen as a generic name by the War Office in 1815, in every sample infantry form in the Soldiers Account Book, signing with a mark. The Cavalry form had Trumpeter William Jones and Sergeant John Thomas, though they did not use a mark. Leslie observes the same name in the 1837 Kings Regulations, pages 204 and 210, and later editions. Leslie comments that this disproves the anecdote about the Duke of Wellington selecting the name in 1843.

Vivid and heartbreaking stories told by the last Tommies - filmed in their 90s and 100s - remembering life and death in World War I, illustrated with powerful archive.