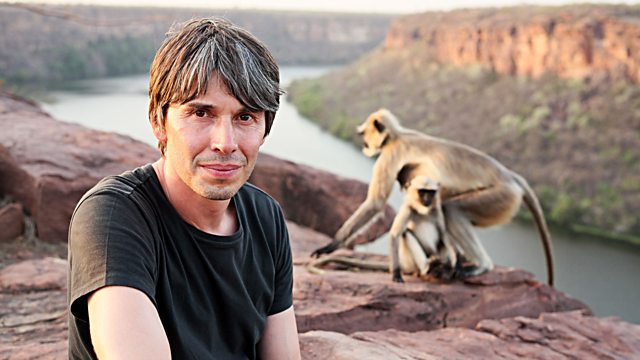 In Human Universe episode 2: Brian Cox reveals how the wonderful complexity of nature and human life is simply the consequence of chance events constrained by the laws of physics that govern our universe. But this leads him to a deeper question – why does our universe seem to have been set up with just the right rules to create us? In a dizzying conclusion Brian unpicks this question, revealing the very latest understanding of how the universe came to be this way, and in doing so offers a radical new answer to why we are here.

Professor Brian Cox asks the biggest questions we can ask as he explores our origins, our place and our destiny in the universe.

Symbiogenesis, or endosymbiotic theory, is an evolutionary theory of the origin of eukaryotic cells from prokaryotic organisms, first articulated in 1905 and 1910 by the Russian botanist Konstantin Mereschkowski, and advanced and substantiated with microbiological evidence by Lynn Margulis in 1967. It holds that the organelles distinguishing eukaryote cells evolved through symbiosis of individual single-celled prokaryotic (bacteria and archaea).

The theory holds that mitochondria, plastids such as chloroplasts, and possibly other organelles of eukaryotic cells represent formerly free-living prokaryotes taken one inside the other in endosymbiosis. In more detail, mitochondria appear to be related to Rickettsiales proteobacteria, and chloroplasts to nitrogen-fixing filamentous cyanobacteria.

Among the many lines of evidence supporting symbiogenesis are that new mitochondria and plastids are formed only through binary fission, and that cells cannot create new ones otherwise; that the transport proteins called porins are found in the outer membranes of mitochondria, chloroplasts and bacterial cell membranes; that cardiolipin is found only in the inner mitochondrial membrane and bacterial cell membranes; and that some mitochondria and plastids contain single circular DNA molecules similar to the chromosomes of bacteria.

Inflation theory was first developed in 1979 by theoretical physicist Alan Guth at Cornell University. It was developed further in the early 1980s. It explains the origin of the large-scale structure of the cosmos. Quantum fluctuations in the microscopic inflationary region, magnified to cosmic size, become the seeds for the growth of structure in the Universe (see galaxy formation and evolution and structure formation). Many physicists also believe that inflation explains why the universe appears to be the same in all directions (isotropic), why the cosmic microwave background radiation is distributed evenly, why the universe is flat, and why no magnetic monopoles have been observed.

Title
Human Universe episode 2: Why Are We Here?
Description

In Human Universe episode 2: Brian Cox reveals how the wonderful complexity of nature and human life is simply the consequence of chance events

The Story of Electricity episode 1 – Spark