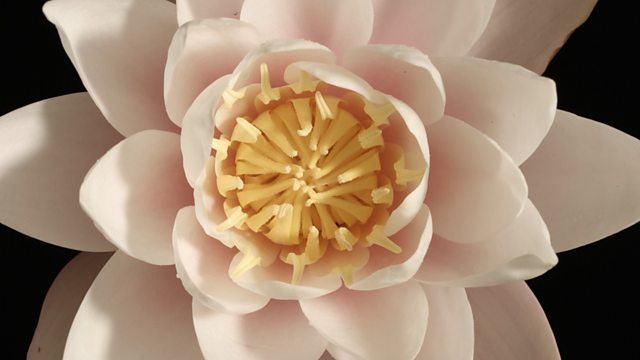 In the fourth and final chapter of the series, Carol Klein takes a look at one of the most recognisable and influential flowers in our world, the waterlily. It is a plant of unlikely economic importance, spiritual significance and artistic inspiration.

She travels to the far east to investigate when and where some of the first flowering plants evolved, and discovers waterlilies are among the earliest branches of angiosperms still around today – practically living fossils. Carol visits the Buddhist temples of South Korea and drinks lotus flower tea with the monks. They revere the lotus, a close relative of the waterlily. Later Carol takes part in a Korean festival held in honour of the lotus.

Back in Europe, she meets one of the world’s top experts in breeding and learns about of one of the most intimate known plant-insect relationships – a dramatic, overnight colour and sex change. Carol joins the waterlily and in its murky aquatic environment to uncover some of this iconic plant’s ingenious adaptations, and its unique prehistoric pollinating system.

Nymphaeaceae  is a family of flowering plants, commonly called water lilies. They live as rhizomatous aquatic herbs in temperate and tropical climates around the world. The family contains five genera with about 70 known species. Water lilies are rooted in soil in bodies of water, with leaves and flowers floating on or emergent from the surface. The leaves are round, with a radial notch in Nymphaea and Nuphar, but fully circular in Victoria and Euryale.

Water lilies are a well studied clade of plants because their large flowers with multiple unspecialized parts were initially considered to represent the floral pattern of the earliest flowering plants, and later genetic studies confirmed their evolutionary position as basal angiosperms. Analyses of floral morphology and molecular characteristics and comparisons with a sister taxon, the family Cabombaceae, indicate, however, that the flowers of extant water lilies with the most floral parts are more derived than the genera with fewer floral parts. Genera with more floral parts, Nuphar, Nymphaea, Victoria, have a beetle pollination syndrome, while genera with fewer parts are pollinated by flies or bees, or are self- or wind-pollinated. Thus, the large number of relatively unspecialized floral organs in the Nymphaeaceae is not an ancestral condition for the clade.

In the fourth and final chapter of the series, Carol Klein takes a look at one of the most recognisable and influential flowers in our world, the waterlily.