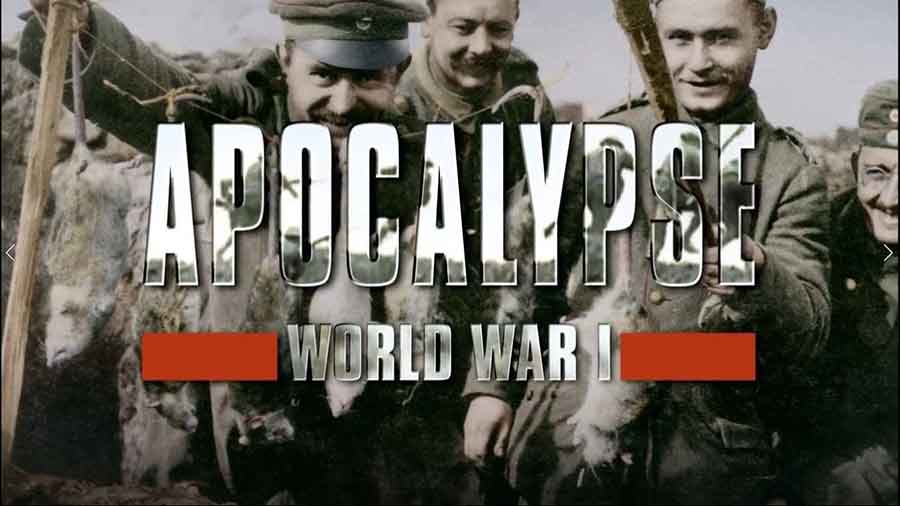 World War 1 – episode 1 – Fury: On June 28th, 1914, the assassination of an obscure Austrian archduke in Sarajevo triggers the most disastrous conflict the world has ever known. Germany becomes an enemy to France, invades Belgium, and in September arrives at the gates of Paris.

Was the sacrifice of an entire generation worldwide an avoidable or a necessary tragedy? Are the roots of World War II to be found in the devastation of World War I and the Treaty of Versailles? This series seeks to address such questions using a global and all-encompassing yet personal and sensitive approach, drawing from over 300 hours of archival footage and tracing the journeys of the civilians and soldiers across the world, anonymous or well-known, who fought for survival in this unprecedented period in human history, both heroic and barbaric.

The assassination of Archduke Franz Ferdinand of Austria, heir presumptive to the Austro-Hungarian throne, and Franz Ferdinand’s wife Sophie, Duchess of Hohenberg, occurred on 28 June 1914 in Sarajevo when they were mortally wounded by Gavrilo Princip. Princip was one of a group of six assassins also containing Muhamed Mehmedbašić, Vaso Čubrilović, Nedeljko Čabrinović, Cvjetko Popović and Trifun Grabež (one Bosniak and five Serbs consecutively) coordinated by Danilo Ilić, a Bosnian Serb and a member of the Black Hand secret society.

The political objective of the assassination was to break off Austria-Hungary’s South Slav provinces so they could be combined into a Yugoslavia. The conspirators’ motives were consistent with the movement that later became known as Young Bosnia. The assassination led directly to World War I when Austria-Hungary subsequently issued an ultimatum to the Kingdom of Serbia, which was partially rejected. Austria-Hungary then declared war on Serbia, triggering actions leading to war between most European states.

On 23 July 1914, almost exactly one month after the assassination, Austria-Hungary issued a demarche against Serbia that contained a list of demands such as dissolving the “Black Hand” and similar secret societies, removing from the military service, the administration, the public instruction and the press all people guilty of propaganda against Austria-Hungary, and beginning a judicial inquiry into the assassination including organs delegated by the Austro-Hungarian government. The Austro-Hungarian ambassador to Serbia delivered the message that Austria-Hungary expected a satisfactory reply within 48 hours, this means by 25 July 1914 at 6 pm.

The Serbian government sent its reply just before the deadline expired on 25 July 1914. However, the response was considered inadequate by Austria-Hungary. The Austro-Hungarian ambassador and his staff left Serbia immediately and diplomatic relations were suspended. The Serbians ordered mobilisation. On 28 July 1914 Austria-Hungary issued a declaration of war against Serbia.

World War 1 - episode 1: June 28th, 1914, the assassination of an obscure Austrian archduke in Sarajevo triggers the most disastrous conflict

Voyages of Discovery episode 5 – Hanging by a Thread