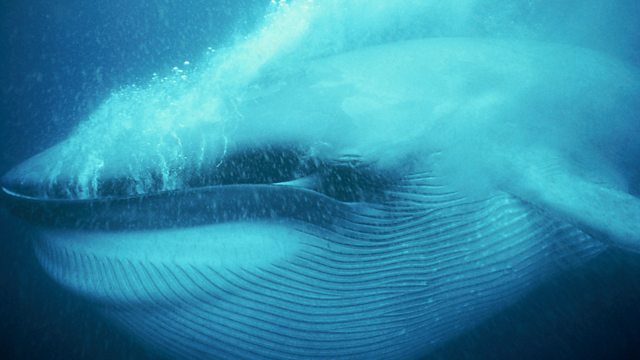 Ocean Giants episode 1 – Giant Lives: This episode explores the intimate details of the largest animals that have ever lived on our planet – the great whales. From the balmy waters of the Indian Ocean to the freezing seas of the Arctic, two daring underwater cameramen – Doug Allan, Planet Earth’s polar specialist, and Didier Noirot, Cousteau’s front-line cameraman – come face to face with fighting humpback whales and 200-ton feeding blue whales.

Teaming up with top whale scientists, Giant Lives discovers why southern right whales possess a pair of one-ton testicles, why the arctic bowhead can live to over 200 years old and why size truly matters in the world of whales.

The humpback whale (Megaptera novaeangliae) is a species of baleen whale. It is one of the larger rorqual species, with adults ranging in length from 12–16 m (39–52 ft) and weighing around 25–30 t (28–33 short tons). The humpback has a distinctive body shape, with long pectoral fins and a knobbly head. It is known for breaching and other distinctive surface behaviors, making it popular with whale watchers. Males produce a complex song lasting 10 to 20 minutes, which they repeat for hours at a time. All the males in a group will produce the same song, which is different each season. Its purpose is not clear, though it may help induce estrus in females.

Found in oceans and seas around the world, humpback whales typically migrate up to 25,000 km (16,000 mi) each year. They feed in polar waters, and migrate to tropical or subtropical waters to breed and give birth, fasting and living off their fat reserves. Their diet consists mostly of krill and small fish. Humpbacks have a diverse repertoire of feeding methods, including the bubble net technique.

Like other large whales, the humpback was a target for the whaling industry. The species was once hunted to the brink of extinction; its population fell by an estimated 90% before a 1966 moratorium. While numbers have partially recovered to some 80,000 animals worldwide, entanglement in fishing gear, collisions with ships and noise pollution continue to affect the species.

The blue whale (Balaenoptera musculus) is a marine mammal belonging to the baleen whale parvorder Mysticeti. Reaching a maximum confirmed length of 29.9 metres (98 ft) and weighing up to 199 tonnes (196 long tons; 219 short tons), it is the largest animal known to have existed. The blue whale’s long and slender body can be various shades of greyish-blue dorsally and somewhat lighter underneath.

The Society for Marine Mammalogy’s Committee on Taxonomy currently recognizes four subspecies: B. m. musculus in the North Atlantic and North Pacific, B. m. intermedia in the Southern Ocean, B. m. brevicauda (the pygmy blue whale) in the Indian Ocean and South Pacific Ocean, B. m. indica in the Northern Indian Ocean. There is also a population in the waters off Chile that may constitute a fifth subspecies.

Blue whales are filter feeders; their diet consists almost exclusively of euphausiids (krill). They are generally solitary or gather in small groups and have no well-defined social structure other than mother-calf bonds. The fundamental frequency for blue whale vocalizations ranges from 8 to 25 Hz and the production of vocalizations may vary by region, season, behavior, and time of day.

The blue whale was once abundant in nearly all the Earth’s oceans until the end of the 19th century. It was hunted almost to the point of extinction by whalers until the International Whaling Commission banned all blue whale hunting in 1966. The International Union for Conservation of Nature has listed blue whales as endangered as of 2018. It continues to face numerous threats, both man-made (ship strikes, pollution, ocean noise and climate change), and natural (killer whale predation).

Ocean Giants episode 1: This episode explore the intimate details of the largest animals that have ever lived - the great whales.