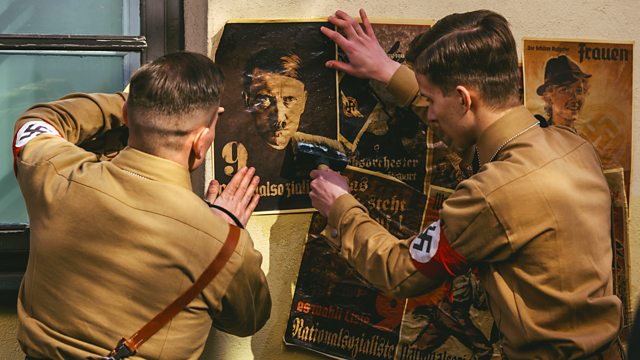 Rise of the Nazis episode 1 - Politics

Rise of the Nazis episode 1 – Politics: This episode takes us into the corridors of power where Germany’s top political mastermind sees an opportunity to use the sudden popularity of the Nazis for his own ends. This sets off a chain of miscalculations, backroom deals and power grabs that will propel Hitler from the fringes of political activism into the heart of government. Hitler wants to become absolute leader of a single-party German state – standing in his way is democracy and the rule of law.

After leading a failed coup in 1923, Hitler decides on a new strategy for taking power: instead of being revolutionaries, the Nazis will become a legitimate, mainstream political party operating under the veneer of legality. Hitler aims to win power democratically and then destroy democracy from within. To achieve his goal Hitler must overcome Germany’s political elite, including Paul von Hindenburg, the president who looks down on him, and, behind the scenes, political mastermind Kurt von Schleicher, who wants to use him.

Whilst this political intrigue plays out at the highest level of government, Hitler faces another obstacle at ground level – a Jewish lawyer called Hans Litten, who is out to prove that the Nazis are far from the legal, legitimate party they claim to be.

Rise of the Nazis episode 1 – Politics

Hitler was born in Austria-Hungary and was raised near Linz. He lived in Vienna later in the first decade of the 1900s and moved to Germany in 1913. He was decorated during his service in the German Army in World War I. In 1919, he joined the German Workers’ Party (DAP), the precursor of the Nazi Party, and was appointed leader of the Nazi Party in 1921. In 1923, he attempted to seize governmental power in a failed coup in Munich and was imprisoned with a sentence of five years. In jail, he dictated the first volume of his autobiography and political manifesto Mein Kampf (“My Struggle”). After his early release in 1924, Hitler gained popular support by attacking the Treaty of Versailles and promoting pan-Germanism, anti-Semitism and anti-communism with charismatic oratory and Nazi propaganda. He frequently denounced international capitalism and communism as part of a Jewish conspiracy.

Paul Ludwig Hans Anton von Beneckendorff und von Hindenburg was a German general and statesman who led the Imperial German Army during World War I and later became President of Germany from 1925 until his death in 1934. During his presidency, he played a key role in the Nazi seizure of power in January 1933 when, under pressure from advisers, he appointed Adolf Hitler as Chancellor of Germany.

Paul von Hindenburg was born on 2 October 1847 to a family of minor Prussian nobility in Posen. Upon completing his education as a cadet, he enlisted in the Third Regiment of Foot Guards as a second lieutenant. He then saw combat during the Austro-Prussian and Franco-Prussian wars. In 1873, he was admitted to the prestigious Kriegsakademie in Berlin where he studied for 3 years before being appointed to the Army’s General Staff Corps. Later in 1885, he was promoted to the rank of major and became a member of the Great General Staff. Following a five-year teaching stint at the Kriegsakademie, Hindenburg steadily rose through the army’s ranks to become a lieutenant-general by 1900. Around the time of his promotion to General of the Infantry in 1905, Count Alfred von Schlieffen recommended that he succeed him as Chief of the Great General Staff but the post ultimately went to Helmuth von Moltke in January 1906. In 1911, Hindenburg announced his retirement from the military.