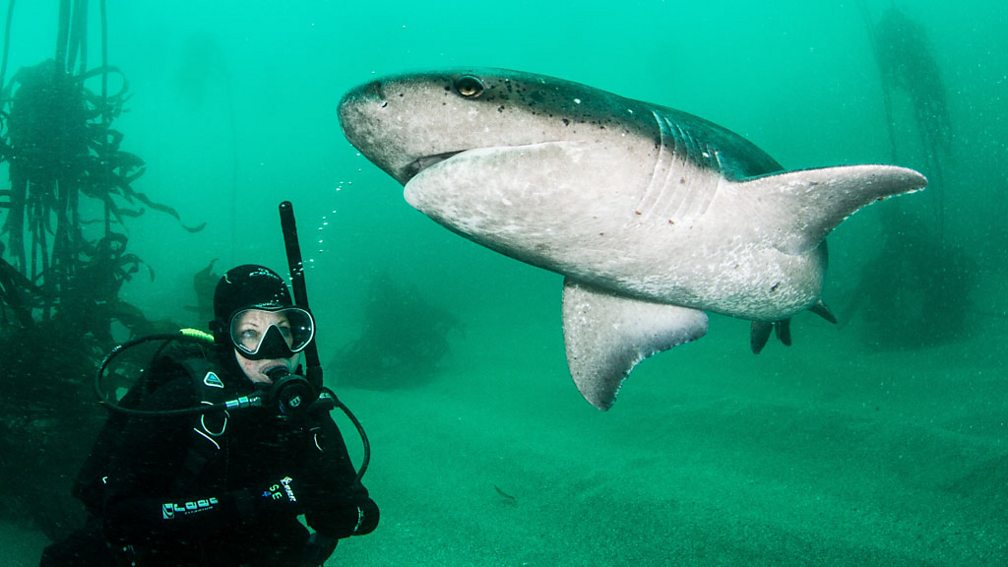 Shark episode 3: Sharks are among the most misunderstood predators on the planet, but an international team of scientists is trying to change that. Their research is revealing that sharks can be sociable and intelligent, and they could even help solve some of the toughest medical challenges of the 21st century. However, their breakthroughs come just as many sharks face extinction. Science may now be the only way to save them.

A major wildlife series on the sharks of the world with over thirty species filmed, showing how they hunt, intricate social lives, courtship, growing up and the threats they face.

Sharks and rays come from one big family that evolved over 400 million years ago. Today they come in a variety of shapes and sizes. But with 510 species of shark and 650 species of ray, what do they really have in common? Well, all sharks and rays share some fundamental features.

They both have a skeleton made of cartilage, similar to what human ears and noses are made of. It’s strong and flexible and means they can turn quickly when chasing prey. A ray is essentially a flattened shark. They still have the same flexible skeleton, but it has been squashed and stretched and the pectoral fins have developed into “wings”. They both have unique skin that is covered in tiny modified teeth. These teeth reduce drag and make the shark swim faster.

All sharks and rays have teeth – even the ones that eat plankton! But in these filter feeders, the teeth are tiny and not used in feeding. Shark teeth vary in size and shape according to what they eat. Some have “crushing plates” that crush their shellfish prey.Unlike humans, sharks and rays never run out of teeth, as they are endlessly replaced.

Both sharks and rays have gills. Most have five but a few species of shark have six or even seven. On a shark the gills are found on both sides of the head, whereas in rays they are found on the underside of the body. The gills are packed with blood vessels, which absorb oxygen from the seawater. This is how they breathe. Some species must continually swim to breathe – if they don’t they will suffocate. But some species can pump seawater over their gills by opening and closing their mouths, which means they can sit on the seabed for long periods of time.

Shark episode 3: Sharks are among the most misunderstood predators on the planet, but an team of scientists is trying to change that.