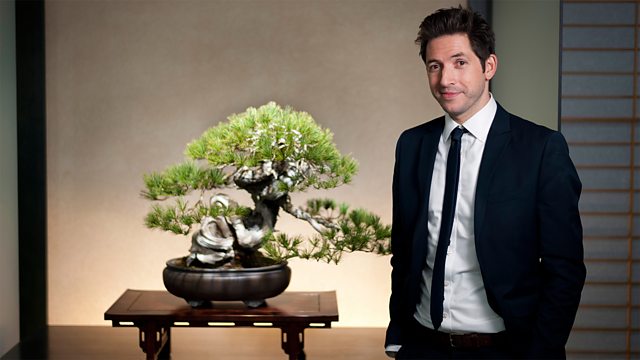 The Art of Japanese Life episode 1 – Nature: Dr James Fox journeys through Japan’s mountainous forests, marvels at its zen gardens and admires centuries-old bonsai, to explore the connections between Japanese culture and the natural environment.

Travelling around Japan’s stunning island geography, he examines how the country’s two great religions, Shinto and Buddhism, helped shape a creative response to nature often very different to the West. But he also considers modern Japan’s changing relationship to the natural world and travels to Naoshima Art Island to see how contemporary artists are finding new ways to engage with nature.

Shinto is a religion which originated in Japan. Classified as an East Asian religion by scholars of religion, its practitioners often regard it as Japan’s indigenous religion and as a nature religion. Scholars sometimes call its practitioners Shintoists, although adherents rarely use that term themselves. There is no central authority in control of Shinto and much diversity exists among practitioners.

Shinto is polytheistic and revolves around the kami (“gods” or “spirits”), supernatural entities believed to inhabit all things. The link between the kami and the natural world has led to Shinto being considered animistic and pantheistic. The kami are worshiped at kamidana household shrines, family shrines, and jinja public shrines. The latter are staffed by priests, known as kannushi, who oversee offerings of food and drink to the specific kami enshrined at that location. This is done to cultivate harmony between humans and kami and to solicit the latter’s blessing.

Other common rituals include the kagura dances, rites of passage, and seasonal festivals. Public shrines also supply religious paraphernalia such as amulets to the religion’s adherents. Shinto does not emphasize specific moral codes although it places a major conceptual focus on ensuring purity, largely by cleaning practices such as ritual washing and bathing. Shinto has no single creator or specific doctrinal text, but exists in a diverse range of local and regional forms.

Naoshima Island is known for its many contemporary art museums. For example, the Chichu Art Museum (literally, “in the earth”) houses a number of site-specific installations by James Turrell, Walter De Maria, and paintings by Claude Monet. Designed by Tadao Ando, it is located on one of the highest points of the island, and various exhibits and facets of the museum’s architecture take advantage of its commanding view. Another contemporary museum (and hotel) is Benesse House, also by Ando. Another is the Naoshima Fukutake Art Museum, with an outdoor sculpture garden, and a third is the James Bond museum, inspired by the island’s use as one of the settings for the 2002 Bond novel The Man with the Red Tattoo by Raymond Benson.

The Art of Japanese Life episode 1 - Nature: Dr James Fox explores the connections between Japanese culture and the natural environment.