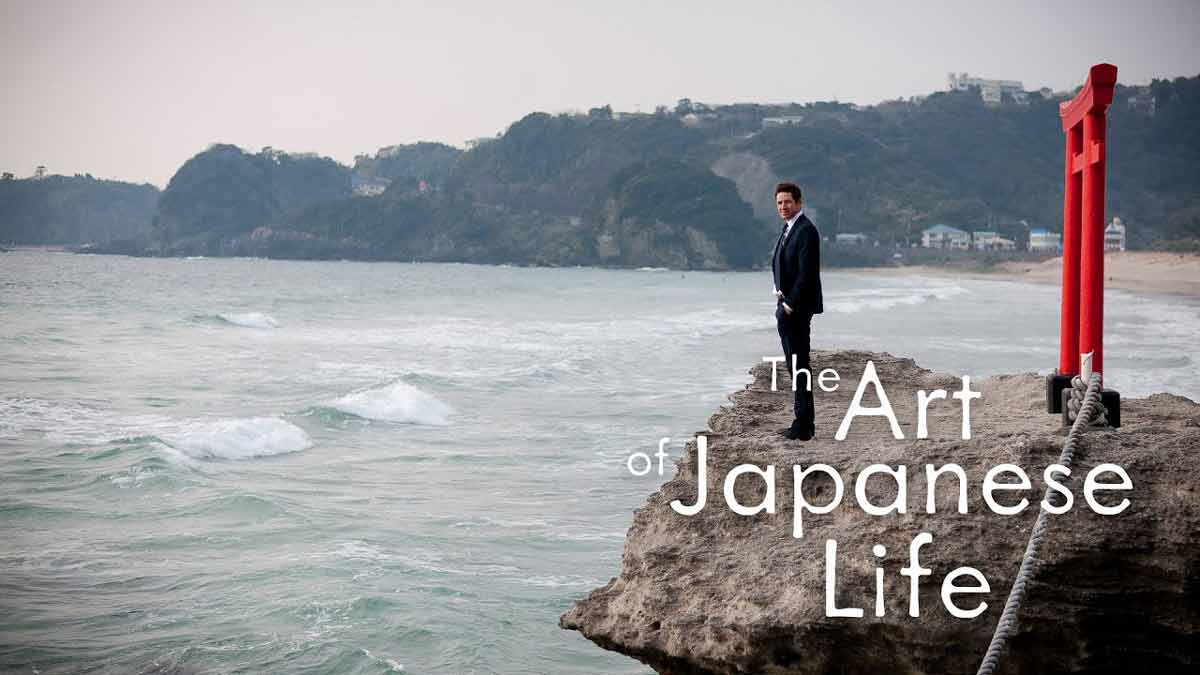 The Art of Japanese Life episode 2 – Cities: Dr James Fox explores how the artistic life of three great Japanese cities shaped the country’s attitudes to past and present, east and west, and helped forge the very idea of Japan itself.

Beginning in Kyoto, the country’s capital for almost a thousand years, James reveals how the flowering of classical culture produced many great treasures of Japanese art, including The Tale of Genji, considered to be the first novel ever written. In the city of Edo, where Tokyo now stands, a very different art form emerged, in the wood block prints of artists such as Hokusai and Hiroshige. James meets the artisans still creating these prints today, and discovers original works by a great master, Utamaro, who documented the so-called ‘floating world’ – the pleasure district of Edo.

In contemporary Tokyo, James discovers the darker side of Japan’s urbanisation, through the photographs of street photographer Daido Moriyama, and meets one of the founders of the world-famous Studio Ghibli, Isao Takahata, whose haunting anime film Grave of the Fireflies helped establish anime as a powerful and serious art form.

The Tale of Genji

The Tale of Genji is a classic work of Japanese literature written in the early 11th century by the noblewoman and lady-in-waiting Murasaki Shikibu. The original manuscript, created around the peak of the Heian period, no longer exists. It was made in “concertina” or orihon style: several sheets of paper pasted together and folded alternately in one direction then the other. The work is a unique depiction of the lifestyles of high courtiers during the Heian period. It is written in archaic language and a poetic yet confusing style that make it unreadable to the average Japanese person without dedicated study. It was not until the early 20th century that Genji was translated into modern Japanese by the poet Akiko Yosano. The first English translation was attempted in 1882 but was of poor quality and incomplete.

Kitagawa Utamaro was a Japanese artist. He is one of the most highly regarded designers of ukiyo-e woodblock prints and paintings, and is best known for his bijin ōkubi-e “large-headed pictures of beautiful women” of the 1790s. He also produced nature studies, particularly illustrated books of insects.

Little is known of Utamaro’s life. His work began to appear in the 1770s, and he rose to prominence in the early 1790s with his portraits of beauties with exaggerated, elongated features. He produced over 2000 known prints and was one of the few ukiyo-e artists to achieve fame throughout Japan in his lifetime. In 1804 he was arrested and manacled for fifty days for making illegal prints depicting the 16th-century military ruler Toyotomi Hideyoshi, and died two years later.

The Art of Japanese Life episode 2: explores how the artistic life of 3 Japanese cities shaped the country's attitudes to past and present.

Treasures of the Louvre