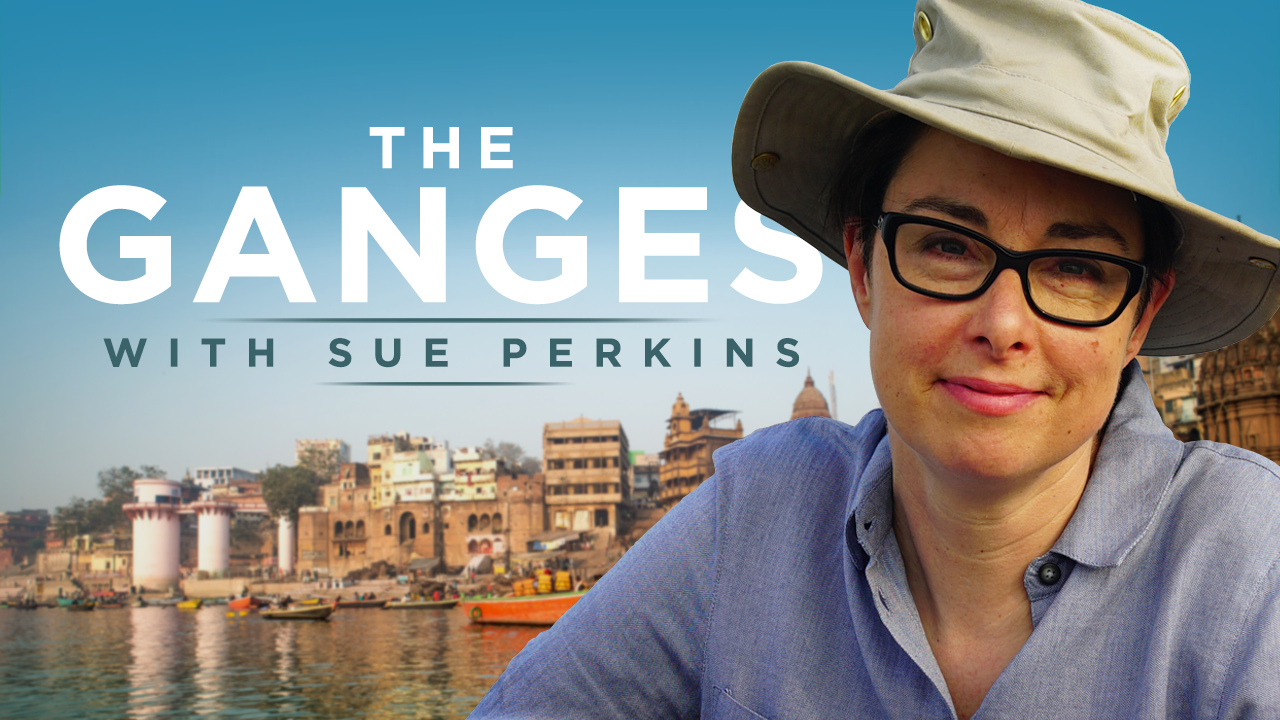 The Ganges with Sue Perkins

The Ganges with Sue Perkins: Sue Perkins goes on an extraordinary journey, spanning over 1,500 miles, from the source of the Ganges high in the Himalayas to the Bay of Bengal. She travels through some of the most extraordinary, chaotic and exciting places on earth, exploring the lives and landscapes of modern India at this crucial point in its history. In this first episode, Sue begins her journey in the highest mountains on earth. She treks to the source of the Ganges river and pokes her nose into the lives of hermits and the wise and wandering holy people that call this sacred landscape home. It’s been a tough year for Sue since her father died, and walking where millions of pilgrims have walked before has a profound effect on her.

As winter approaches and the pilgrim season ends, Sue moves 20km downstream to the little town of Gangotri, joining the local pageantry festivities. It’s a world that feels utterly timeless, but modernity is sweeping up this valley on a tide of tarmac, and the new influx of visitors – and their cash – to such a remote and fragile environment is changing life in the high mountains.

One hundred and sixty miles downstream, Sue arrives in Rishikesh – a town that has long been the gateway to the land of the gods and has drawn holy men and seekers of truth since time immemorial. Now it’s an all-you-can-eat buffet of eastern mysticism. Sue goes shopping before heading to the Mahesh Maharishi Yogi Ashram, where The Beatles and the Maharishi turned the west on to Indian spirituality and put Rishikesh firmly on the world map.

Fifty years after The Beatles passed through, there are dozens of Ashrams now in Rishikesh. They’re a sort of health spa for the soul, places where you can meditate, receive spiritual guidance and detox from the modern world. More and more westerners are being drawn to these quiet places and eastern religions. Sue books a short stay at one of Rishikesh’s largest ashrams to try and understand why.

The Ganges with Sue Perkins episode 1

On Sue’s last leg of the first stage of her journey, she arrives at the holy city of Haridwar, where the Ganges finally leaves the mountains and flows into the plains. Sue meets a holy man turned business guru who now runs one of India’s fastest-growing consumer goods companies – packaging Hinduism for the masses. Together they tour his compound on an armed golf buggy, and Sue discovers what happens to spirituality when it enters the commercial world.

To complete this first leg, Sue attends the nightly Ganga Aarti ceremony on the banks of the Ganges in Haridwar. There are no tourists here, just normal, everyday people, who come to praise a sacred river and the goddess that lives in her. The sense of love and devotion here is utterly overwhelming.

The Ganges is a trans-boundary river of Asia which flows through India and Bangladesh. The 2,525 km (1,569 mi) river rises in the western Himalayas in the Indian state of Uttarakhand. It flows south and east through the Gangetic plain of North India, receiving the right-bank tributary, the Yamuna, which also rises in the western Indian Himalayas, and several left-bank tributaries from Nepal that account for the bulk of its flow. In West Bengal state, India, a feeder canal taking off from its right bank diverts 50% of its flow southwards, artificially connecting it to the Hooghly river. The Ganges continues into Bangladesh, its name changing to the Padma. It is then joined by the Jamuna, the lower stream of the Brahmaputra, and eventually the Meghna, forming the major estuary of the Ganges Delta, and emptying into the Bay of Bengal. The Ganges-Brahmaputra-Meghna system is the third largest river on earth by discharge.

The Ganges is a lifeline to millions of people who live in its basin and depend on it for their daily needs. It has been important historically, with many former provincial or imperial capitals such as Pataliputra, Kannauj, Kara, Munger, Kashi, Patna, Hajipur, Delhi, Bhagalpur, Murshidabad, Baharampur, Kampilya, and Kolkata located on its banks or the banks of tributaries and connected waterways. The river is home to approximately 140 species of fish, 90 species of amphibians, and also reptiles and mammals, including critically endangered species such as the gharial and South Asian river dolphin. The Ganges is the most sacred river to Hindus. It is worshipped as the goddess Ganga in Hinduism.

The Ganges with Sue Perkins: Sue Perkins goes on an extraordinary journey, spanning over 1,500 miles, from the source of the Ganges