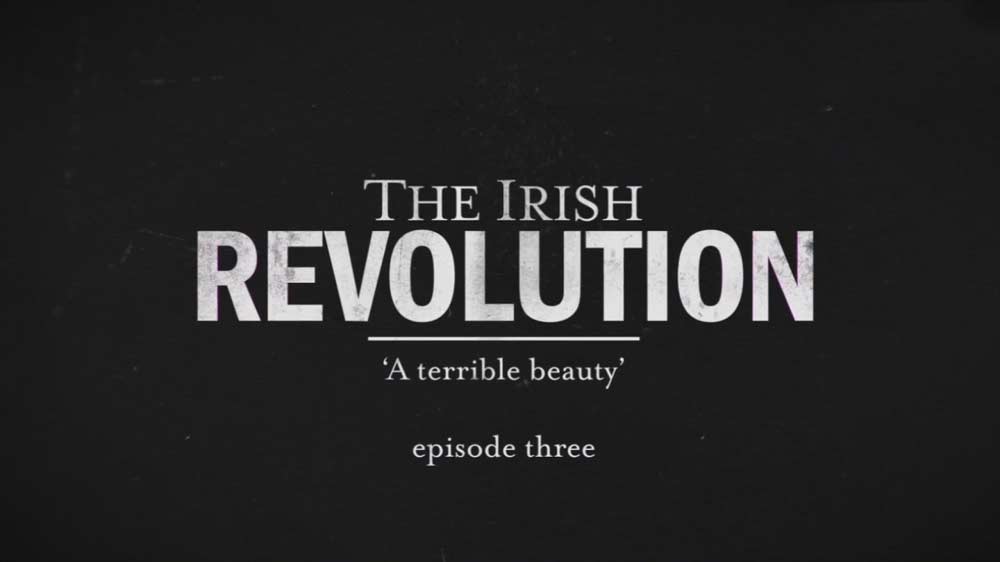 The Irish Revolution episode 3 : A look at how the British government sought a political solution in 1921 when much of the countryside became ungovernable as rebels escalated armed attacks. Marking the centenary of the Irish War of Independence, a major documentary project narrated by Cillian Murphy.

Revealing the extraordinary story of how against all odds and armed with little more than idealism, blind faith and courage, a small group of rebels forced Britain, the world’s most powerful nation, to withdraw after centuries of conquest and misrule, this is a landmark production for audiences throughout the world.

Featuring rarely seen archive footage, rare, first hand witness accounts, 3-D CGI mapping, dramatic visuals and contributions by the finest writers and historians, THE IRISH REVOLUTION tells the story of the people’s revolution of 1916 to 1922, as it has never been told before. We explore how the rebels drew heavily the revolutionary spirit that swept the world in the first years of the 20th century, reveal the astonishing events that forced Britain’s hand and show how the Irish example had a far reaching impact, causing millions around the world to rise up and demand their right to equality and freedom.

The Irish War of Independence or Anglo-Irish War was a guerrilla war fought in Ireland from 1919 to 1921 between the Irish Republican Army (IRA, the army of the Irish Republic) and British forces: the British Army, along with the quasi-military Royal Irish Constabulary (RIC) and its paramilitary forces the Auxiliaries and Ulster Special Constabulary (USC). It was an escalation of the Irish revolutionary period into warfare.

In April 1916, Irish republicans launched the Easter Rising against British rule and proclaimed an Irish Republic. Although it was crushed after a week of fighting, the Easter Rising and the British response led to greater popular support for Irish independence. In the December 1918 election, the republican party Sinn Féin won a landslide victory in Ireland. On 21 January 1919 they formed a breakaway government (Dáil Éireann) and declared Irish independence.

Title
The Irish Revolution episode 3 - The Spirit of Freedom
Description

The Irish Revolution episode 3 : A look at how the British government sought a political solution in 1921 when much of the countryside became ungovernable.

They Shall Not Grow Old