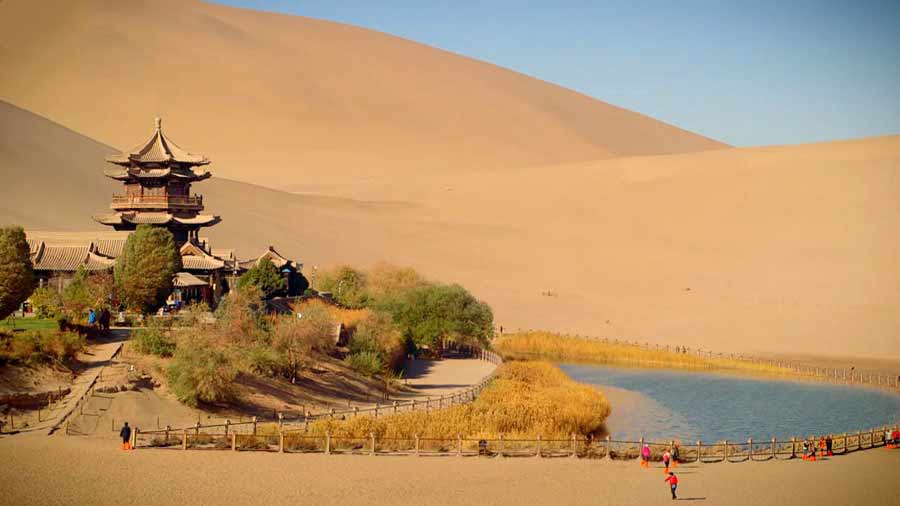 The Silk Road episode 2: In the second episode of his series tracing the story of the most famous trade route in history, Dr Sam Willis travels west to Central Asia, a part of the Silk Road often overlooked and yet the place of major innovations, big historical characters and a people – the Sogdians – whose role was pivotal to its success.

In the high mountain passes of Tajikistan, Sam meets the last survivors of that race, who once traded from the Mediterranean to the China Sea. In the Uzbek cities of Samarkand and Bukara, he discovers how they were built by armies of captive craftsmen for one of the greatest conquerors the world has ever seen – Timur.

From here, Sam follows the flow of goods back towards the markets of the west, showing how their trading culture sparked cultural, technical and artistic revolutions all along the Silk Road, and goes back to school to learn where modern mathematics and astronomy were born.

The Silk Road derives its name from the lucrative silk, first developed in China and a major reason for the connection of trade routes into an extensive transcontinental network. The German term Seidenstraße (“the Silk Road”) was coined in 1877 by Ferdinand von Richthofen, who made seven expeditions to China from 1868 to 1872. The term “Silk Route” is also used. Although the term was coined in the 19th century, it did not gain widespread acceptance in academia or popularity among the public until the 20th century. The first book entitled The Silk Road was by Swedish geographer Sven Hedin in 1938.

Use of the term ‘Silk Road’ is not without its detractors. For instance, Warwick Ball contends that the maritime spice trade with India and Arabia was far more consequential for the economy of the Roman Empire than the silk trade with China, which at sea was conducted mostly through India and on land was handled by numerous intermediaries such as the Sogdians. Going as far as to call the whole thing a “myth” of modern academia, Ball argues that there was no coherent overland trade system and no free movement of goods from East Asia to the West until the period of the Mongol Empire. He notes that traditional authors discussing East-West trade such as Marco Polo and Edward Gibbon never labelled any route a “silk” one in particular.

The Silk Road episode 2: Dr Sam Willis travels west to Central Asia, a part of the Silk Road often overlooked and yet the place of major innovations, big historical characters and a people