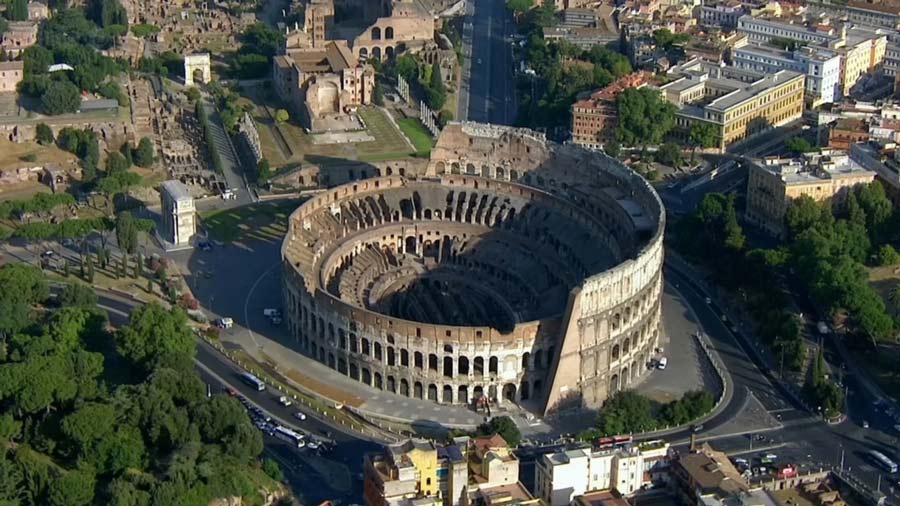 Part 5 : The Republic of Virtue

How did an insignificant cluster of Latin hill villages on the edge of the civilised world become the greatest empire the world has known? In the fifth programme of the series, archaeologist and historian Richard Miles examines the phenomenon of the Roman Republic, from its fratricidal mythical beginnings, with the legend of Romulus and Remus, to the all too real violence of its end, dragged to destruction by war lords like Pompey the Great and Julius Caesar.

Travelling to Sicily and North Africa, Richard tells the story of Rome’s century-long struggle for dominance with the other great regional power, Carthage. It was a struggle that would end with the total destruction of this formidable enemy and the transformation of landlubber Rome into a seapower, and the Republic into an Empire. But with no-one left to beat, the only enemy that Rome had left was itself.

Part 4 : Return of the King

In Richard Miles’s epic story of civilization, there have been plenty of examples of the great men of history, but none came close to the legend of Alexander of Macedon, known to us as ‘Alexander the Great’. Uniting the fractious Greek city-states, he led them on a crusade against the old enemy, Persia, and in little more than a decade created an empire that stretched from Egypt in the west to Afghanistan in the east.

But it was Alexander’s successors, the Hellenistic Kings, who had to make sense of the legacy of this charismatic adventurer. By knuckling down to the hard graft of politics, taxation and public works, they created something far more enduring than a mere legend – they built a civilization.

Richard traces Alexander’s battle-scarred route through Turkey, Syria and Lebanon to Egypt and ultimately to the western Punjab, Pakistan, where he discovers fascinating traces of a city where Greek west and Buddhist east were united in an intriguing new way.

In the fifth programme of the series, archaeologist and historian Richard Miles examines the phenomenon of the Roman Republic.