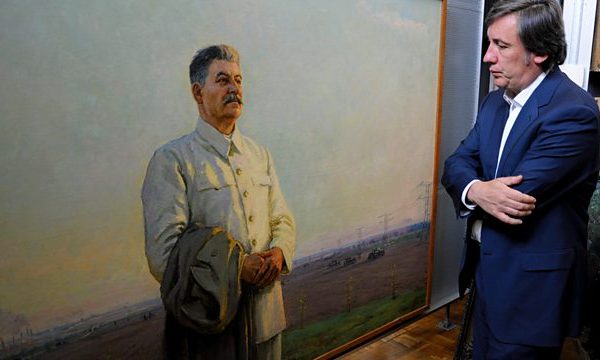 The Art of Russia is a series in which art critic Andrew Graham-Dixon tells the incredible story of Russian art – its mystery and magnificence – and until now a story untold on British television.

The Art of Russia Part 1: Out of the Forest

He explores the origins of the Russian icon from its roots in Byzantium and the first great Russian icon, Our Lady of Vladimir to the masterpieces of the country’s most famous icon painter, Andrei Rublev. Both epic and awe-inspiring, and producing brilliant art, nevertheless medieval Russia could be a terrifying place. Criss-crossing the epic landscape, Andrew visits the monastery founded by Ivan the Terrible, where his favourite forms of torture found inspiration in religious art. One man would shine a light into Russia’s ‘dark’ ages – Peter the Great who, surprisingly, took as his inspiration Deptford in South London.

The Art of Russia Part 2: Roads to Revolution

He explores how Russia changed from a feudal nation of aristocratic excess to a hotbed of revolution at the beginning of the 20th century and how art moved from being a servant of the state to an agent of its destruction. From monuments that celebrate the absolutism of the tsars to the epic Russian landscape as inspiration; from the design and construction of gold and glittering palaces to the minutiae of diamond-encrusted Faberge eggs; and eventually to the stark and radical paintings of the avant-garde, the journey through Russian art history is one of extraordinary beauty and surprise.

The Art of Russia Part 3: Smashing the Mould

The final part examines political revolution and how art was at the forefront of throwing out 1,000 years of royal rule, from its earliest revolutionary days of enthusiasm and optimism when painting died, the poster was king and the machine-made triumphed over the handmade to the dead hand of Socialist Realism. Andrew roots out great portraits of Stalin now hidden in museum storerooms and never on public view, looks at the transformation of the Moscow metro into a great public art gallery and visits the most stunning creation of post-war Communist rule, the Space Monument.