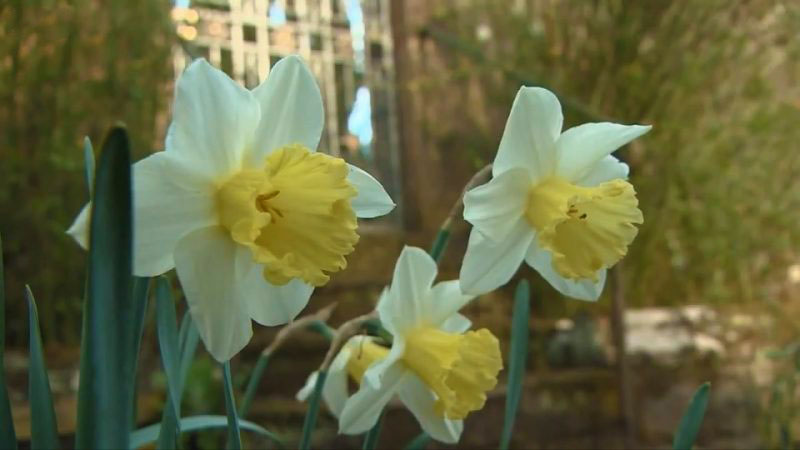 It’s daffolicious in the Beechgrove garden as Jim takes a look at his trial of new versus old daffodils to see if traditional beats contemporary in the daffodil world.

Meanwhile George further tests that theory as he visits Backhouse Daffodils near Auchtermuchty who have daffodils that are the origins of many of the modern daffodils in use today.

Chris reviews his climbers for every aspect and to complement them he adds roses to the cutting garden. Pruning is sometimes a thorny issue and so Carole and Jim are pruning their way around the garden to show us how to take the mystery out of it.

Carole took a look at the Northern Lights spring bedding display and layered bulbs in pots.

This led on to the design of a display around the colours of the Northern Lights with a swirly abstract pattern. Carole pointed out the vivid Tulip praestans ‘Shogun’, which had opened up in the sunshine into an orange star-shape with a black spidery centre.

Jim and Carole were dispelling some of the mysteries of pruning, starting in the Silver Garden with the low hedge of Lonicera nitida ‘Silver Beauty’, which is going into its third growing season. This hedge divides the Silver Garden and the Trials area. Jim explained that we want it to have battered sides, i.e. have it narrower at the top than at the bottom.

Chris was in the Cutting Garden where he was adding some new weeping standard roses to the garden for height and structure. The weeping standard Rose ‘Super Fairy’ has double pink blooms which cascade in a floral fountain. Super Fairy ‘Super Dorothy’ has up to 50 button sized pink flowers on one spray. It is also a repeat flowerer.

George went to look at the Heritage Backhouse Daffodils at Rofsie Estate near Auchtermuchty. Caroline Thompson, along with her husband Andrew, take care of a very unique historic Daffodil collection that has over 200 varieties.

It's daffolicious in the Beechgrove garden as Jim takes a look at his trial of new versus old daffodils to see if traditional beats contemporary in the daffodil world.