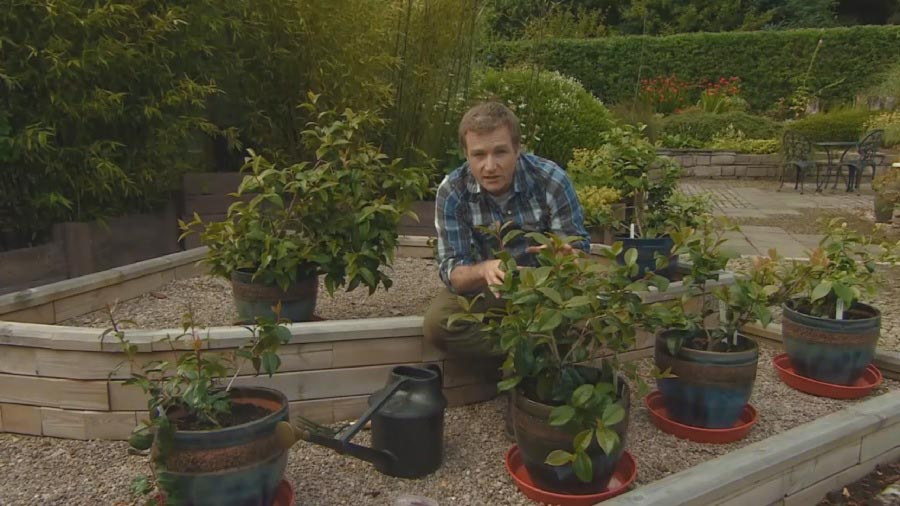 Everything is blooming rosy in the Beechgrove Garden episode 18 2015 as Jim, Carole and Chris catch up with progress of Beechgrove’s new/old rose garden.

And finding out a bit more about the science of plant genetics, Jim is at Dundee Botanic Garden taking a walk through plant history in their Evolutionary Garden. George is with Lee Street in Bonchester Bridge creating an edible, fruiting hedge as a windbreak to protect her existing productive raised beds.

Jim was in the Main Vegetable Plot admiring the brassicas which have done well in the cool, wet conditions we’ve had this summer so far. In one part of the brassica beds, Jim has been growing two types of cauliflower – F1 hybrid vs open pollinated. ‘Clapton’, is an F1 hybrid which is described as club root resistant.

The beautiful heads are all forming at the same time which is typical behaviour of an F1 hybrid. Whilst this produces good quality, uniform cauliflowers it means that you end up with a glut as they are all ready to harvest and eat at the same time.

Lee Street and her husband moved to their small holding in Bonchester Bridge 18 months ago from Yorkshire and have been working hard to get it into a state to make it productive – they plan to grow fruit and vegetables to support their self-sufficiency idea. They are in a windy spot, with a 20 metre border on one side of the small holding bearing the brunt of the wind with speeds of 30-50mph. George helped them to create a windbreak hedge of wild and edible fruiting plants.

Chris was in the Low Maintenance Garden removing a lavender underneath the canopy of a rather grand golden Chamaecyparis. In Programme 2 (9th April 2015), Chris had removed the lower branches of this vast overgrown conifer. He commented that is remarkable that there have been no weeds growing in the ground here
over the summer but that this is due to the shade, acidity of the needle litter from the conifer and the effects of rain drip.

Everything is blooming rosy in the Beechgrove Garden as Jim, Carole and Chris catch up with progress of Beechgrove's new/old rose garden.