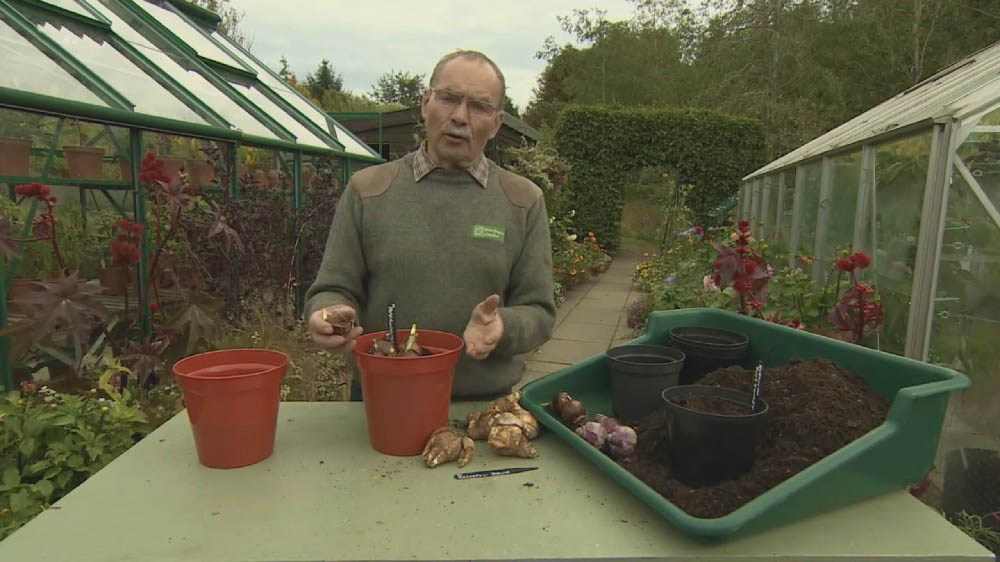 Expert grower and shower of flowering bulbs George demonstrates the steps to creating a spring display of potted hyacinths with show-bench style. Meanwhile, Jim assesses the mini fruit plot, where there is a harvest even in the tiniest of spaces. Carole visits Glenkyllachy Garden near Tomatin, Strathdearn. This Highland glen garden is renowned for its spectacular autumn colours framing views to the River Findhorn.

The weather in the last couple of weeks has been a bit of a challenge with very high winds and rain and it has been the same in much of Scotland caused by Storm Ali passing through. Our garden team had protected the Dahlias and the brassicas at Beechgrove but sadly the sweet peas didn’t survive the weather. Dahlias however will last and give colour till the first frosts.

One job for the day had been to remove the summer annuals from the border which has the trees for small gardens in it and Jim had intended to sow some green manure but it was far too breezy to sow seed. Instead reflecting the windy weather Jim checked on the staking of these trees to make sure they were secure. Acer grosseri var. hersii which is called the snake bark maple was showing its stunning bark. It was starting to colour up for autumn.

More of Colour and Science in the Garden

At this time of year a number of plants are coming alive bearing their autumn colours. Dr Martin Barker from Aberdeen University’s School of Biological Sciences was back at Beechgrove with Carole discussing the science of colour and why plants change their colour in autumn. He explained that autumn colours in the leaves of deciduous plants are caused by the breakdown of chlorophyll due to the dwindling light levels at this time of year.

Colourful pigments that are also present in leaves but are hidden by chlorophyll then start to show through. The predominant of these are the Anthocyanins (reds) carotenoids (red/orangish), and xanthophyll (yellows). There is a lab technique called chromatography – to separate a mixture into its individual components – Martin showed Carole how to do this in an attempt to separate the different leaf pigments.

Planting up Spring Bulbs for Greenhouse Display in 2019

George was planting up bulbs for colour and scent for Christmas and next spring. He started with Paper White Narcissus which need to be planted up 10 weeks before flowering. George used a mixture of multi-purpose compost, leaf mould and grit (7:3:2 ratio) as a growing medium. George filled a deep pot with this and planted 8 bulbs on the surface. He then topped the pot up with grit to add extra weight so that when they start to root they do not push themselves out of the compost.

These should then placed in a dark cool place for 8 weeks. They can then be placed outside your front door or brought indoors to flower.