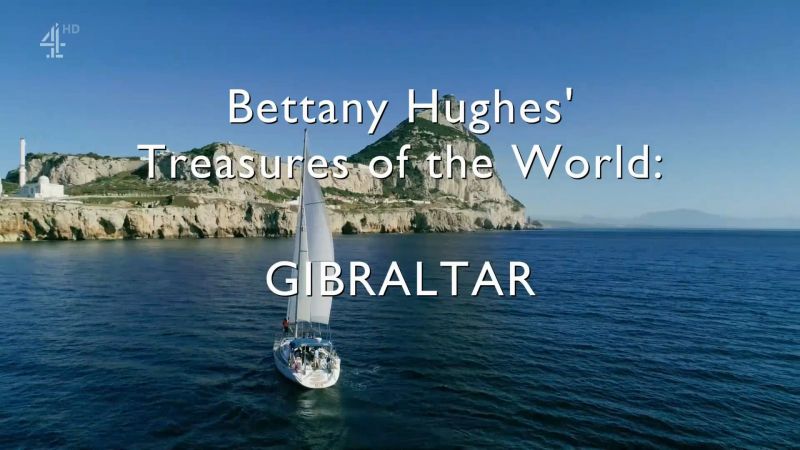 Bettany Hughes Treasures of the World episode 3: The historian explores Gibraltar, encountering the world’s first evidence of Neanderthal art, and handles the first report of Admiral Nelson’s death in the Gibraltar Chronicle. She also explores the colourful natural formations of the underground pleasure gardens, and discovers where Victorian officers left messages carved into cave walls.

Gorham’s Cave is a sea-level cave in the British overseas territory of Gibraltar. Though not a sea cave, it is often mistaken for one. Considered to be one of the last known habitations of the Neanderthals in Europe, the cave gives its name to the Gorham’s Cave complex, which is a combination of four distinct caves of such importance that they are combined into a UNESCO World Heritage Site, the only one in Gibraltar. The three other caves are Vanguard Cave, Hyaena Cave, and Bennett’s Cave.

It is located at Governor’s Beach on the southeastern face of the Rock of Gibraltar. When first inhabited some 55,000 years ago, it would have been approximately 5 km (3.1 mi) from the shore, but, due to changes in sea level, it is now only a few metres from the Mediterranean Sea.

Vice-Admiral Horatio Nelson, also known simply as Admiral Nelson, was a British flag officer in the Royal Navy. His inspirational leadership, grasp of strategy, and unconventional tactics brought about a number of decisive British naval victories during the French Revolutionary and Napoleonic Wars. He is widely regarded as one of the greatest naval commanders in history.

Nelson was born into a moderately prosperous Norfolk family and joined the navy through the influence of his uncle, Maurice Suckling, a high-ranking naval officer. Nelson rose rapidly through the ranks and served with leading naval commanders of the period before obtaining his own command at the age of 20, in 1778. He developed a reputation for personal valour and firm grasp of tactics, but suffered periods of illness and unemployment after the end of the American War of Independence.

The outbreak of the French Revolutionary Wars allowed Nelson to return to service, where he was particularly active in the Mediterranean. He fought in several minor engagements off Toulon and was important in the capture of Corsica, where he was wounded and lost partial sight in one eye, and subsequent diplomatic duties with the Italian states. In 1797, he distinguished himself while in command of HMS Captain at the Battle of Cape St Vincent. Shortly after that battle, Nelson took part in the Battle of Santa Cruz de Tenerife, where the attack failed and he lost his right arm, forcing him to return to England to recuperate. The following year he won a decisive victory over the French at the Battle of the Nile and remained in the Mediterranean to support the Kingdom of Naples against a French invasion.