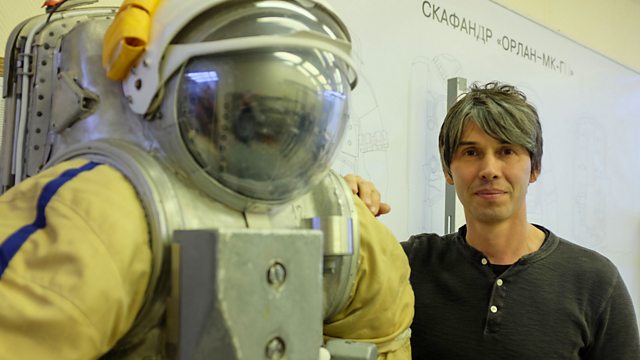 Brian Cox’s Adventures in Space and Time episode 1: Brian believes we are at the start of a new age of space travel, where space flight is on the verge of becoming routine. In this episode, he explores the latest science and takes a new look at his old films and asks: how far can we go in our exploration of the cosmos?

Brian begins in Russia’s cosmonaut training facility in the outskirts of Moscow, where he dons a spacesuit to discover what ‘the right stuff’ is and what it might take to carry out maintenance on the International Space Station in low earth orbit. It is an eye-opening experience that reveals just how physically demanding being an astronaut can be.

He then looks at some of the most extraordinary achievements of space exploration to date. Under the clear sky of the Atlas Mountains, he tells the story of how we started to explore the cosmos from earth. Careful observation of ‘wandering stars’, now known as the planets, initially led our ancestors to believe that Earth, not the sun, was at the centre of our solar system. But as our knowledge of the cosmos grew, so did our appetite to explore; eventually technology made it possible for us to take our first steps towards the stars. In Russia’s Star City, Brian visits the office of Yuri Gagarin, the first man in space. At Cape Kennedy Space Centre he marvels at the enormous Saturn V rocket that launched the first men to the moon. Brian reflects on the difficulties of filming this giant machine, and on his encounters with the extraordinary men who flew in it to the moon.

Brian Cox’s Adventures in Space and Time episode 1 – Space: How Far Can We Go?

Looking to the future, Brian recalls his meeting with aerospace engineer and visionary advocate of Mars exploration Robert Zubrin. He’s credited with inspiring Elon Musk and Jeff Bezos to develop rockets with the aim of making the red planet the next frontier of human space exploration.

Professor Cox concludes that Mars will be the limit of human space exploration in our lifetime – our bodies can’t withstand the demands of travelling much deeper into the cosmos. To explore further, we must send robots in our place. Brian reveals some of his favourite probes to have uncovered the wonders of our solar system. This includes Voyager 1, whose iconic image of Earth from deep space taught us the true value of exploration: perspective.

Title
Brian Cox's Adventures in Space and Time episode 1 - Space: How Far Can We Go?
Description

Brian Cox's Adventures in Space and Time: Brian believes we are at the start of a new age of space travel, where space flight is on the verge of becoming routine.

Human Universe episode 4: A Place in Space and Time