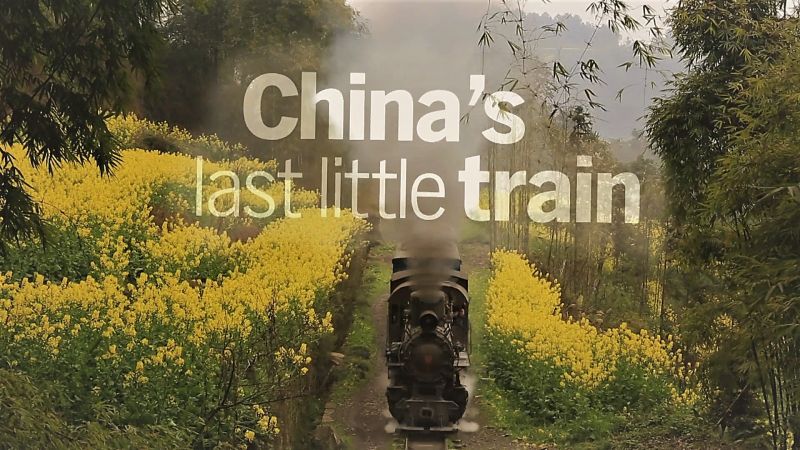 China’s Last Little Train: In a mountainous region best known for pandas and earthquakes, there are no roads, no cars, no buses. But there is … a train. We tell the story of the last working narrow gauge steam railway in China.

The Jiayang Steam Train in Sichuan Province has been running non-stop since 1959, when it was built as part of Chairman Mao’s Great Leap Forward.

Jiayang Little Steam Train is a classic narrow-gauge train running near Jiayang Coal Mine in Qianwei County, Sichuan Province. The gauge of the small train is nearly half the gauge of a national standard train. It takes about 2 hours to round-trip along the line. It is the only narrow-gauge steam train in the world that is operated regularly. While sitting on a small train, the rocking and swaying as the train starts and stops is clearly evident, you can truly sense its age. During flower season, you can see a large terrace fields of blooming rape flowers along the way. The Jiayang Train is an excellent choice for experiencing railway culture.

The Jiayang Coal Railway, also known as Shixi–Huangcunjing Railway or Shibanxi Railway, is a narrow gauge railway in Sichuan in Qianwei County near Leshan, China.

A coal mine was established at Bajiaogou in 1938. The coal was initially transported in manually-propelled trucks on a 600 mm (1 ft 11 5⁄8 in) gauge railway track to Mamio, where the coal was loaded onto barges on the Mabian river.

Initially, coal wagons were used to carry both coal and passengers. In the 1960s, trains with separate coal and passenger rolling stock became available. In 1975, six pairs of passenger-only trains operated daily, independently from the coal transport, but that was reduced to four passenger trains per day over the years.

Additional mines near Jiaoba and Yuejin, Sichuan, were also connected to the railway line. In 2000 the Yuejin–Shixi line was electrified with 550V DC. The transport of coal on the remainder was discontinued in 2003, but passenger trains still operated, due to the lack of a road connection. In May 2004 the local government requested that the line be maintained as a heritage railway, as more and more tourists became interested in it. In 2010 it was listed as national cultural heritage. Tickets for tourists cost ¥80, but locals are only charged ¥0.5.