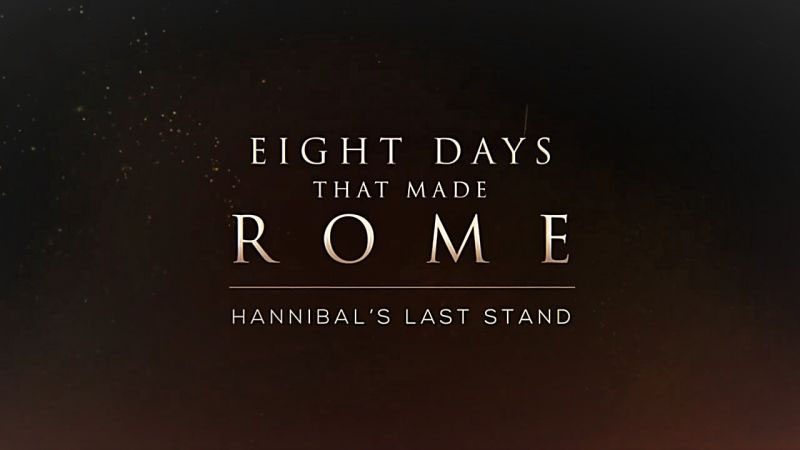 Eight Days That Made Rome

Eight Days That Made Rome is a docu-drama that leaves behind the conventional chronologies of Rome’s thousand-year history and brings razor-sharp focus to eight days that created, tested and defined its greatness. Each programme works as a stand-alone, as strong in its own right as part of a series and reveals a Rome relevant to us today, with its noblest and darkest instincts still resonating in the world around us.

Bettany Hughes recalls eight pivotal days that defined the Roman Empire and its establishment as the world’s first superpower. She begins by exploring the day in 202BC when Rome defeated the might of Carthage under Hannibal at the Battle of Zama in modern-day Tunisia. This was a decisive moment, setting Rome on the path to greatness and exemplifying the military muscle and supreme ambition on which its empire would be built.

This first episode covers the defeat of the army of the great Carthaginian general Hannibal by Roman upstart Scipio in 202 BC. Hannibal’s hordes had ravaged Italy in the years beforehand, until the wily Scipio drew them back to north Africa and the killing plains of Zama. The victory consolidated Rome’s position as the new bully boys on the block: recent discoveries in Andalucia reveal just how ruthless they were in their expansionist ambitions.

Hannibal lived during a period of great tension in the western Mediterranean Basin, triggered by the emergence of the Roman Republic as a great power after it had established its supremacy over Italy. Although Rome had won the First Punic War, revanchism prevailed in Carthage, symbolised by the alleged pledge that Hannibal made to his father never to be a friend of Rome. The Second Punic War broke out in 218 BC after Hannibal’s attack on Saguntum, an ally of Rome in Hispania. He then made his famous military exploit of carrying war to Italy by crossing the Alps with his North African war elephants. In his first few years in Italy, he won a succession of dramatic victories at the Trebia, Lake Trasimene, and Cannae.

Eight Days That Made Rome is a docu-drama that leaves behind the conventional chronologies of Rome's thousand-year history and brings focus to eight days.