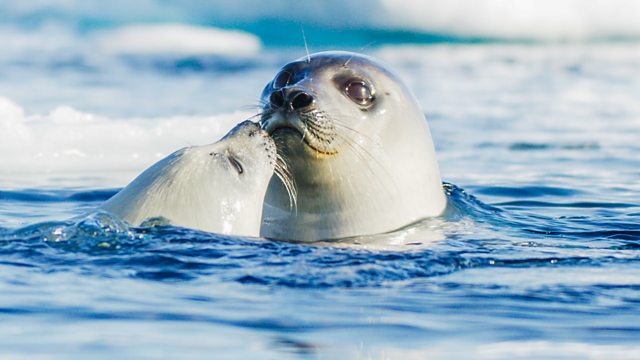 Frozen Ocean: At the top of our planet lies a magical realm, the Arctic Ocean. After four months of winter darkness, the sun returns to reveal a frozen ocean covered in ice. Mother polar bears emerge from their hillside dens and lead their cubs down to the sea ice to hunt, while a young male and female bear forge a surprising friendship out on the ice.

For others, the frozen sea is a trap. A pod of beluga whales has been confined to an ice hole for five months, slowly starving to death as the food around them runs out. Their salvation lies in the strengthening sun that comes with spring, melting the sea ice, allowing their escape.

Off the east coast of Greenland, the floating pack ice in spring is a nursery ground for harp seals. Mothers and pups have just a few weeks together for the pup to learn to swim before she leaves him to fend for himself. But in today’s warming climate, storms can tip helpless youngsters into the sea before they are strong enough to fend for themselves.

Summer is a time of plenty in the Arctic Ocean as plankton blooms feed millions of tiny mouths, such as bizarre skeleton shrimps, as well as the biggest: bowhead whales. These ancient and long-lived whales arrive en masse every year at secret locations known as whale spas. But today, with the loss of summer sea ice, their peace is shattered by orcas from the south. These daring predators are bold enough to take on the much larger bowheads, targeting their vulnerable calves.

The 24-hour daylight of the Arctic summer attracts visitors from afar, including huge flocks of seabirds like crested auklets. A male must use both his song and a secret tangerine perfume if he is to attract a mate. For the resident walrus, the summer heat can be unbearable. After hauling himself to the beach to moult, an old male uses an ingenious technique to get himself back to the cool of the water – a roly-poly!

Summers in the Arctic today bring record-breaking heat. With climate change, it is warming faster than anywhere else on Earth. It is predicted that the Arctic Ocean could become ice-free each summer by 2035, raising new challenges for polar bears. Without sea ice, more and more bears are becoming stranded on remote Arctic islands. It’s a dangerous place to be for a mother bear with cubs, surrounded by larger, predatory males.

Frozen Ocean: At the top of our planet lies a magical realm, the Arctic Ocean. After four months of winter darkness, the sun returns to reveal a frozen ocean covered in ice.